Cabbage Patch dolls were a huge fad 40 years ago, so popular that they caused marketplace frenzy in late 1983. Stores couldn’t keep up with demand and shopping conditions literally became chaotic. Shoppers who couldn’t get one for Christmas were frantic. Clips about the cabbage patch doll craze still show up on YouTube. Authentic dolls from that era cost $100 or more for antique collectors.

I was diagnosed with bladder cancer about six weeks after coming back from the family trip we took to Africa in June 2018. My urologist did a bladder scraping to establish a correct diagnosis. The cancer was extensive in the bladder but had not spread elsewhere. Standard BCG treatment for this kind of cancer was set to begin a few weeks later to allow inflammation from the initial diagnostic scrapings to heal.

I asked my urologist to let me try a special diet for bladder cancer I had learned about. He was skeptical but saw no harm in trying it since his treatment plan would not begin for 10 weeks anyway. With Carol’s help, I began my anti-cancer diet immediately.

Ten weeks later, when my urologist scoped my bladder to begin my treatment, he was stunned. He could not find a single trace of bladder cancer. He had an assistant double-check all the paperwork to make sure he had the right patient. Then he canceled the treatment. He re-scoped my bladder every few months because this type of cancer recurs frequently. I remain cancer-free nearly three years later.

What is this diet and why is it so effective? Dr. Walter Li is a practicing physician/scientist. His research over 40 years focused on the effect of food on various kinds of cancer. He found that cabbage family foods consistently kill bladder cancer cells. In addition to cabbage, this family includes cauliflower, broccoli, kale, Brussels sprouts, bok choy, collard greens, turnips, radishes and arugula.

These foods generate sulforaphane as they are being chewed and digested. Sulforaphanes inhibit several important cancer growth factors, which is how these foods stop bladder cancer cells. Dr. Li suggests a high intake of cruciferous (cabbage family) vegetables for patients with bladder cancer. He also advises hearty intake of other vegetables but avoidance of sugar and other highly processed foods.

It wasn’t hard for me to adopt this anti-cancer diet because I was already eating vegan-style most of the time, as well as avoiding sugar and highly processed foods. Now I eat 15 or more servings of mostly organic veggies and fruits along with a variety of grains and nuts daily. I look forward to my meals and enjoy my food very much. The idea that healthy foods are boring is a myth. 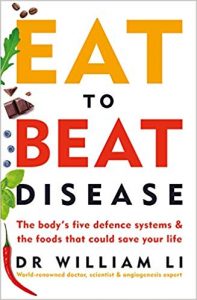 Are cruciferous foods effective with other kinds of cancer? Dr. Li’s research shows that it helps fight other cancers but that it’s most effective against bladder cancer. Different foods vary in their effectiveness against different kinds of cancer. His book, Eat to Beat Disease, goes into much more detail about the value of food against many kinds of disease.

Since cruciferous vegetables are valuable in treating bladder cancer, why don’t doctors recommend them? Most doctors don’t know about their value. Yet good medical scientists have known for years that broccoli helps fight cancer.

Dr. Li published some of his work in a respected cancer journal 10 years ago. The National Cancer Institute has extensive reviews of cruciferous vegetables in treating several kinds of cancer. Studies with lab rats show that sulforaphanes and other cruciferous compounds help treat and prevent several kinds of cancer. Studies done with large numbers of humans have had mixed results, most showing little or no benefit.

A common problem with large populations is that most people don’t follow a healthy diet for a lengthy time, so failure to find positive benefits is not surprising. Yet hundreds of case reports of good results with highly motivated individuals exist. In this statistically-oriented age, individual case reports don’t carry much weight. The end result is that the value of cruciferous foods is not taught to doctors.

Yet the word about the good nutritional value of broccoli is growing. More articles on this are being published. Medical schools are slowly improving nutritional teaching for their students, and new graduates will be better informed than in the past. Unfortunately, it takes longer to reach practicing doctors. Even if your doctor is not aware of the value of cabbage patch treasures, now you know. Enjoy those treasures in good health!