WHOLE is Best for WELLNESS

WHOLE: Rethinking the Science of Nutrition is the title of T. Colin Campbell’s new book. Dr. Campbell is Professor Emeritus of Nutritional Biochemistry at Cornell University. He has done cutting-edge nutritional research for over 50 years and has produced over 350 professional research papers. He and his son, Thomas M. Campbell II, MD, are co-authors of The China Study, one of the most acclaimed books in recent years on the power of nutrition to influence health. 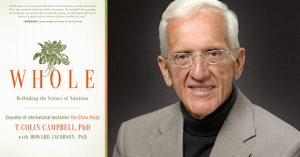 Growing up on a dairy farm, Colin Campbell intended to become a veterinarian. He went to veterinary school one year before being recruited to Cornell University, where he earned his MS and Ph.D. degrees in nutrition, biochemistry and microbiology. His doctoral thesis was on the superiority of animal-based protein. He thought his main contribution to human welfare would to find ways of making animal-based protein more available to people around the world.

Because of this, some of his early research involved feeding varying kinds and amounts of protein to rats. He was shocked that high amounts of animal protein intake (20 percent) resulted in high cancer rates in his lab rats, whereas low levels of protein intake (5 percent) did not. What was even more shocking was that casein, the main protein in milk, was among the worst offenders for triggering cancer. Plant proteins, on the other hand, did not stimulate cancer growth at all.

Campbell designed the China project as a large observational study to learn what kind of impact food intake had on genetically similar people in 65 counties. To put the results in a nutshell, people who mainly ate whole, plant-based foods had much lower rates of cancer, heart disease and other Western maladies than people who ate more animal-based foods. These differences were highly significant. Nutrients were more powerful than genes as health determinants!

“Whole” is Better Than “Fragmented”

Dr. Campbell’s research has shown Whole Plant-Based Foods (WPBF) to be the best healing modality we have today, stronger than drugs, surgery, chemotherapy, or radiation therapy. Yet, most research in health today is narrowly focused on improving these other modalities. Instead of studying the big picture of what benefits health, researchers choose to explore fringe areas of the picture.

Campbell says the reductionist paradigm is a deeply flawed paradigm, one that “looks for truth only in the smallest details, while entirely ignoring the big picture.” The reductionist model has governed scientific inquiry for over a century, and it has helped us learn an immense amount of useful information. Campbell’s own research was reductionist through most of his early career. Yet he sees deep-seated problems related to this reductionist approach today.

Discoveries that look promising in narrowly focused settings may be less helpful or even harmful in a larger context. It’s great to find benefits in isolated extracts, but it’s risky to give them cure-all status. Beta-carotene, and vitamin E are vivid examples of this. Both are essential for human health, but when they were given as isolated extracts in large-scale studies, death rates of the targeted diseases went up. People given placebos did better. Extracts removed from whole foods do not carry the benefits of the whole food.

Campbell cites the research on apples done at Cornell by Dr. Liu as an example of this. Professor Liu and his research team found that 100 grams of whole apple had 5.7 milligrams of vitamin C. Yet, when they measured the vitamin C-like activity in the same amount of apple, it was 273 times more powerful than the vitamin C that could be extracted from the apple.

Follow-up research revealed that over 99 percent of the vitamin C-like activity was due to many other antioxidants in the apple. Thousands of phytonutrients may exist in an apple. Each one affects a host of other complex nutritional processes. Giving people vitamin C as an isolated extract doesn’t provide a fraction of the value of eating the whole apple. An isolated nutrient simply cannot come close to matching the value of the whole food.

According to Campbell, reductionism causes other serious problems. The reductionist paradigm is so deeply ingrained in science today that any research proposed outside this model is scorned. It’s far easier to get research projects funded if micro questions about genes or micro-cellular functioning in health and nutrition are posed than if whole foods are involved.

Funders get a bigger bang for their buck from narrowly focused micro-research than from broad studies centered on whole foods. New micronutrient findings can be patented to generate income, while research about whole foods doesn’t generate new income. Scientists concentrate their research questions almost entirely in areas that are likely to be funded, creating a loop that explains why the existing reductionist paradigm only reinforces and rewards ongoing reductionist science.

Campbell also notes that reductionism in Big Medicine and Big Pharma results in serious distortion of national health politics and policies. The medical field is splintered into countless specialties, each focusing on a small slice of disease and how to treat it. The pharmaceutical industry is even more reductionistic in its search for new drugs to treat disease. Between them, the overwhelming focus in “health care” is concentrated on treatment of diseases with drugs, surgery or radiation.

Because they are major players in health care (and major lobbyists), politicians and government swing behind their lead, becoming another great force favoring the status quo. Big Business, Big Medicine, Big Pharma, and Big Government don’t really want change. Lip service is given to the value of good nutrition and exercise, but funding to implement the long-range benefits of these lifestyle measures across our society is slim indeed.

Campbell knows his subject well. He’s been on many important national panels on health and nutrition, giving him insider views of our government and the major players in the health field. Earlier in his career, he thought he could influence national health policies when others understood the remarkable results of his research. Even though he is highly regarded for his distinguished research, his input is largely ignored when it comes to practical application at the national level. Political leaders and even scientists tend to wear blinders when reviewing research results they don’t want to follow.

Disillusioned today, Campbell sees little hope for change coming from the top. In discussing our “failed health care system,” he calls a spade a spade. He has become somewhat controversial and not everyone agrees with him, but his underlying research is rock-solid. He now believes real change in health matters and nutritional policies will come only when demanded by the public. After reading his book, I agree. Whole makes it clear how important wholesome lifestyles are for all of us, individually and nationally!