Walter Manyange is a student at Hartzell High School whom I’ve mentioned previously. I met him by chance four years ago when our paths happened to converge as I was crossing the AU campus. As we chatted, I realized that he was a very bright lad. He had a lot of self-confidence without any trace of arrogance. 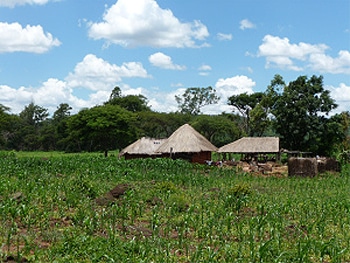 Our paths crossed occasionally as he crossed campus on his way home from school. I learned that he came from a poor home about a mile on the other side of the AU farm. He was one of seven siblings. Two of the older siblings were married, each with a small child, but they still lived with the family because of inability to find employment in Zimbabwe’s tough economic times. Even though poverty-stricken, Walter’s mother was the glue who held the extended family together. His father had been absent since migrating to South Africa to find work several years previously.

Walter developed a serious medical problem in 2013-14 when he was found to have a tumor on his kidney. After referral and careful evaluation in Harare, it was decided that he had to have surgery. The community rallied around the family. When the AU chaplain learned about Walter’s problem, he started a fund-raising campaign to cover his medical expenses.

The surgery in early 2014 was successful, and I was glad to find that Walter had recovered well by the time I returned to AU this year. However, another disaster struck the family this past August. Their thatched roof caught fire and all their clothes, papers and possessions burned up when the flaming grass roof collapsed into the home. Fortunately, the two small children were rescued and there was no injury or loss of life. Even so, the impact of the fire disaster was severe.

Impact of the Fire Disaster

Neighbors and friends helped construct a new thatched roof to provide shelter for the family and gave them some used clothing. They also provided some food to help them through the short term, but they amount they could give was limited. All the neighboring families are poor, and every family is dependent on stored maize (dried corn) from their previous crop to supply their basic foodstuff and the seeds for their next planting. Every rural family in Zimbabwe depends on this annual agricultural cycle for survival. It is how Zimbabwe survives its economic tough times despite 80 percent unemployment. Every sack of maize stored in the Manyange home burned up in the fire. They had none left for food or seed to plant the new crop for the coming year.

Although the loss of all their stored maize was the worst result of the fire, there were other adverse impacts. All their paper documents burned up in the fire, including all birth certificates, school records and books, and medical records. Some records can be replaced, but even this is hard to do. Birth certificates are required for many purposes, including school registration for school-age children. At $20 per certificate, this is a tough challenge for the family. 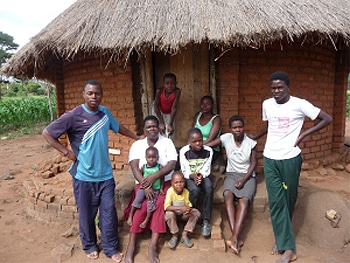 Walter, right, with his family

Walter is entering upper level high school in the coming year. All students must have a laptop computer to carry out their assignments. Walter has been a good student, and he’s confident he will do well in Forms 5 and 6. Yet with no electricity or Wi-Fi at home, it will be hard for him to keep up with his homework. Because of this, he wants to register as a boarding student rather than a day student. Others have also told me that boarding is best at this level.

All of this means added expenses for the family. Costs for the first term, including the laptop, will be close to $1,000. Later terms will be about $600 per term. Clearly, there’s no way the family can afford this. I told Walter and his mother that I will give them some help, but it’s simply not possible for me to solve all the family’s problems.

Several years ago, I established the Foundation for Healthy Africa, primarily to help students at Africa University and to help support small research projects aimed at improving health in Africa. The foundation is small, but it has contributed to scholarships for several students. Helping Walter with his education is as important as helping students at AU.

If you wish to contribute to Walter Manyange’s scholarship, you can do so by donating to the Foundation for Healthy Africa. Ultimately, our goal is to help establish a Center for Lifestyle Excellence at Africa University. Thanks in advance for your donation!