Home Food Glorious Food The Benefits of a Blender

The Benefits of a Blender

My wife bought a new kitchen appliance recently, and we’re having fun with it. It’s a powerful food blender that can emulsify almost any food you can think of. We’ve had a food juicer for a number of years, and we always enjoy drinking the various juice combinations that Carol creates. One of our favorites is a carrot-celery-apple-ginger-orange juice combination that is delicious and nutritious.

Why get a blender when we were happy with the juicer we already had? Good question – one worth exploring in this issue of the newsletter. Both are of value. I’ll list several pros and cons about blenders and juicers, but before getting to this, it’s important to be clear about the major difference between blenders and juicers.

Juicers obtain juice from fruits or vegetables by cutting them into extremely small pieces with sharp rotating blades at very high speeds, and simultaneously separating the juice from the fibrous parts. The juice is literally an extract of the whole food, with the fibrous parts being discarded as waste.

A blender, on the other hand, turns fruits or vegetables into smoothie-like consistency with a high-speed rotating blade that does not separate the liquid from the pulpy parts of the food. The whole food is simply transformed into a liquid or semi-liquid form that can be drunk from a cup or spooned from a soup bowl.

The first blender was patented in 1922 by a Polish-American inventor named Stephen Poplawski. Almost all blenders since then are based on the principles he discovered. Citrus juicers had been invented before that, and a variety of juicers have been designed over the years since then. 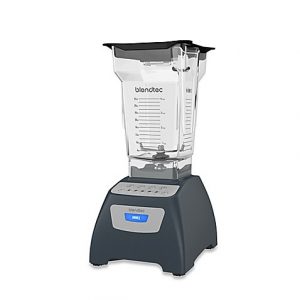 One of the great values of both juicers and blenders is that they can make veggies and fruits more enticing by turning them into tasty drinks or desserts. This is great for families with children (or adults) who won’t eat these nutritious foods, saying they don’t like them. Most will love the juice combinations that can be made from these same foods! If anyone in your family has trouble getting in five servings of fruits and veggies a day, this is a good way of doing it.

A blender is better than a juicer for broadening the range of nutritious foods your family can eat, simply because blenders can prepare a larger variety of foods, including whole juices, desserts, dips, salsas, sauces, and soups.

Foods or drinks fixed with blenders or juicers are best consumed soon after preparation. The reason for this is that these foods and drinks tend to become oxidized fairly quickly. In that process they lose some of their nutritional value. Tests show that juices are oxidized more quickly than pureed foods, so juicer drinks should be drunk on the spot rather than being put in the refrigerator. Even pureed foods are best if consumed fairly soon after being made.

The sugar content of any pure juice tends to be higher than for the whole fruit. A serving of orange juice, for example, actually comes from several oranges, combining all their fructose. This principle is true for most fruits. In addition, juice is absorbed into the body more quickly than if consumed as part of the whole fruit. Many nutritionists recommend limiting juice drinks to no more than an eight-ounce glass a day because most juices are so high in fructose content.

This is less of an issue for fruits and vegetables processed through a blender, simply because it is the whole food that is consumed, even though it is emulsified. The whole food is nutritionally more valuable than any extract from it can be. In addition, because the whole food with all of its fiber is digested more slowly, we find that 16-ounce blended produce is all we need for lunch. This makes planning and fixing lunch very easy.

Blenders have another practical advantage over juicers. Cleaning our Blendtec is a breeze compared to cleaning most juicers. After rinsing out the blender food container, Carol simply puts clean water in it with a drop of liquid soap, and runs it for thirty seconds. Presto! The blender has cleaned itself very effectively.

Juicers are more complicated, with parts that must be meticulously cleaned and washed by hand. The result of this difference is that, aside from any other theoretical benefits, a blender is likely to be used more often than a juicer. Such increased frequency of use is a nutritional plus, although technically, ease of cleaning is not a nutritional qualification.

I’ll conclude today’s newsletter with two blender recipes that we have tested. The first is a fruit-based recipe that is delicious. The other is a green smoothie recipe recommended by Dr. Oz, as modified by us. We like them both!

The fact that we picked the swiss chard, kale, and strawberries from our own small organic garden just before blending everything together made this exotic drink all the more attractive. It’s worth noting that ease of modifying recipes to suit one’s taste or to make use of what one has available is another plus for either juicers or blenders.

To be frank, not all green smoothies taste appealing, even though they are very nutritious. It’s worth modifying recipes or simply trying various assortments of vegetables and fruits to find a winning combination. The one caution I’d keep in mind is to avoid or minimize adding sweeteners such as sugar, honey, agave syrup, or maple syrup. These are all high in fructose, so if you use any of these types of sweeteners, remember that a little goes a long way.

Many smoothie recipes can be found online, where there are a host of nutritious green sites! Explore and enjoy them!