We’ve known about vitamin D for a long time. It was first named in 1921, and it’s chemical structure was fully identified by the mid-1930s. For many years it was thought to be important mainly for good bone health and for the prevention of rickets. Today we know that it’s important for many other health conditions also — far more than we knew when I graduated from medical school 50 years ago.

I had the privilege of interviewing Dr. Michael Holick on my radio program recently. He is the physician whose basic research on vitamin D began in the early 1970s, and whose findings over the past few decades have revolutionized our understanding of its importance. As a result of his research, we now know that many vital organs in the body have receptors for vitamin D, and that they need adequate vitamin D to function at their best.

It turns out that D is really a hormone rather than a vitamin. We make the precursor of this hormone when sunshine strikes our skin. This then undergoes a two-stage development process by going to the liver for further modification, and then on to the kidneys and other target organs where it is fully activated. The fact that we make it in our own bodies to travel through the blood stream to do its work is what makes it a hormone.

We also get vitamin D in some of our foods. It was first found in cod liver oil. That’s why early scientists in this field made the mistake of thinking it was a vitamin. Other dietary sources include several kinds of fish, such as catfish, salmon, sardines and tuna. It can also be found in certain kinds of mushrooms, if they are grown under ultraviolet irradiation. It may also be found in beef liver. Yet, for most people, diet is not adequate as a source of vitamin D.

As already noted, it took years of painstaking research to trace D’s pathways through the body and to learn that it is really a hormone. Only in recent years have researchers learned that the intermediate stage produced in the liver is what’s captured by a wide variety of human tissues as it travels through the blood stream. These include tissues like the brain, breast, heart, colon, prostate and others. Cells in these organs change it to the active form of vitamin D in just the right amounts if enough of the intermediate form is supplied to them.

In the next phase of their research, they exposed prostate cancer cells to 25-vitamin D and found that the cancer cells also turned the intermediate form into active vitamin D. What happened next was stunning. The chaotic growth of the cancerous tissue stopped and changed to a normal growth pattern. In short, Dr. Holick showed that vitamin D in its active form is important in regulating normal cell growth.

The finding that vitamin D helps regulate normal cell growth, coupled with the finding that many people are deficient in vitamin D, especially in northern latitudes, helps explain another puzzle. It has been known for decades that many diseases, including prostate, breast and colon cancer, as well as many other disorders, are more common in northern latitudes than in tropical and semi-tropical areas. This disease pattern matches the geographic pattern of vitamin D deficiency very closely. It looks like Vitamin D deficiency may be a triggering factor for many diseases.

There is another bit of evidence that adequate vitamin D is crucial for good health at a very deep level. Researchers have learned that the activated vitamin D produced in the body regulates up to two thousand different genes that control cell growth and other cellular functions. These functions include production of insulin in the pancreas as well as the hormone renin in the kidneys. Vitamin D turns out to be essential for good health in many ways.

With all this evidence of the underlying importance of the sunshine vitamin for good health, it’s a good idea to know how much vitamin D one needs for optimal health. We know now that older recommendations of vitamin D dosage could help prevent rickets, but they are not adequate for all the other critical functions carried out by vitamin D. Diet is not an adequate source of vitamin D for most people.

Sunlight is a good source of vitamin D, but most people do not get enough sunlight, especially since sunblock lotions are used extensively today. In addition, people living in northern climates and those whose work or lifestyle keeps them indoors most of the time are very likely to be deficient in vitamin D. 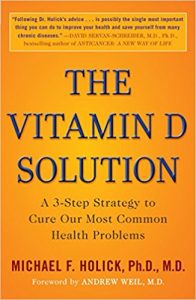 Because of all this, Dr. Holick recommends that adults take 2000 IU of vitamin D daily, while children should have 1000 IU daily. These doses are higher than those recommended by the Institute of Medicine, but are perfectly safe doses to take, and they are endorsed by the Endocrine Society of America. Dr. Holick states that it does not matter if vitamin D is taken in the D2 or the D 3 form. The body converts either one to the form it needs.

I conclude this newsletter by recommending Dr. Holick’s book, The Vitamin D Solution. If you wish to learn more about the fascinating story of vitamin D’s importance, you need to read this book to get the full picture of what we’re learning. I’ve given you just a few highlights, but as an insider, Dr. Holick gives you a ringside seat on this voyage of discovery. And, as he would say, we still have much more to learn!