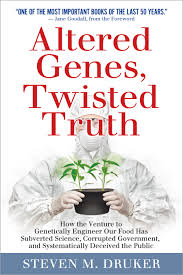 Altered Genes, Twisted Truth is a new landmark book by public interest attorney Steven M. Druker. Documenting the evolution of the GMO story in detail, it’s full of revelations previously unknown to the public that were unearthed by his determined spadework. He sheds light on many buried skeletons uncovered by his unswerving pursuit of the truth. His investigation included a lawsuit he initiated to force the U.S. Food and Drug Administration (FDA) to open its secret files on genetically engineered foods.

The book’s subtitle is: How the Venture to Genetically Engineer Our Food Has Subverted Science, Corrupted Government, and Systematically Deceived the Public. This is a very strong statement. Yet it summarizes what Druker found, and it’s an important story for all of us. The book has much more information than I can summarize here, but several themes from the book are worth highlighting.

Genetic engineering became technically feasible in the early 1970s when molecular scientists learned how to copy a gene from the DNA of one kind of bacteria and splice it into the DNA of another. This recombinant DNA technology is at the heart of genetic engineering. It was a remarkable scientific achievement that involved overcoming immense technical difficulties. Never before had it been possible to create a new breed of species by combining genetic material from two totally different species.

Within a few years, dozens of new microbial strains were created in scientific labs. Pride over this feat was tempered by concern about possible risks associated with this new power. What if a new strain escaped from the laboratory and began causing serious disease? This was such a concern that the National Academy of Science (NAS) called for voluntary scientific restraint in creating recombinant DNA molecules until their potential hazard could be better evaluated. In 1976 the National Institutes of Health (NIH) issued a set of research guidelines dealing with this issue and banning the deliberate release of any organism containing recombinant DNA.

Between 1976 and 1978, three major scientific meetings were held to evaluate the safety of engineered organisms. By that time many molecular biologists felt that governmental restraints and red tape would impair progress in their field, and a concerted effort was made to reduce the perceptions of associated risks. Focusing on a specific type of weakened bacteria commonly used in laboratories, called E. coli K-12, a consensus emerged that this weak laboratory strain of bacteria was highly unlikely to survive if it ever escaped from the lab, much less cause any kind of epidemic.

On the basis of this consensus, a summary sent to the NIH Director reported that any possible epidemic hazard was remote. The media picked this up with headlines to the effect that scientists “unanimously” concluded the danger of runaway epidemics to be virtually non-existent. In reality, the consensus had focused only on weakened K-12 bacteria, and even then, it was not unanimous. Several prominent scientists sent letters to the NIH Director indicating that there were still significant safety concerns.

Despite such concerns, the dominant reports from these conferences carried the misleading idea that science had declared genetic engineering to be perfectly safe. An intensive lobbying campaign was then carried out to convince Congress about the safety issue. It was successful, and the end result was that Congress stopped trying to regulate genetic engineering.

Violation of the Food Safety Law by the FDA

Despite this political success by the biotechnology industry, an older food safety law was still in place to protect the public. The Food, Drug, and Cosmetics Act (FDCA) was signed into law in 1938 to ensure product safety. By 1958, so many new additives and processed foods were appearing in the market that Congress decided to strengthen the FDCA to deal with these additives.

The official Senate report on the Food Additive Amendment of 1958 stated: “While Congress did not want to unnecessarily stifle technological advances, it nevertheless intended that additives created through new technologies be proven safe before they go to market.” After 1958, any new food additives had to undergo rigorous testing to be proven safe. Older additives were exempt from this requirement if they were “Generally Recognized As Safe (GRAS).” This law allowed a new substance to be put into the GRAS category only if a consensus of experts agreed that its safety had already been firmly established by scientific procedures.

In 1991, the FDA established a scientific task force to help develop its policy on genetically engineered foods. Experts from many disciplines provided written evidence of potential risks posed by GE foods.The clear consensus of these FDA scientists was that substantial risks were involved in the genetic engineering of food. Yet FDA administrative decisions about safety issues overrode the expressed concerns of its own scientists. Safety testing by the FDA was by-passed. A memo from FDA Commissioner David Kessler in March 1992 stated that the “approach and provisions of the [FDA] policy statement are consistent with the general biotechnology policy established by the Office of the President.”

In May 1992, Vice-President Dan Quayle announced the new policy as a major achievement in the White House’s campaign for “regulatory relief.” Genetically engineered foods were to be considered safe. In formulating its policy statement, the FDA ignored the 1958 food safety law as well as serious reservations by many scientists. The final published policy was worded precisely as desired by the White House team, hoodwinking the media and the public into thinking that the safety of genetically engineered foods had been proven. It hadn’t. Politics had simply trumped science.

In one of his chapters, Druker makes interesting comparisons between biotechnology and computer science. Both deal with complex information systems, although information systems of living organisms are far more complicated than those of the most sophisticated computer information systems. An apple tree and its ecosystem is infinitely more complex than any Apple computer with all of its apps! Making any kind of successful change in either kind of system is difficult because inter-connecting networks often lead to totally unexpected side-effects or errors. Some of these may be so subtle as to initially escape the most rigorous testing.

Yet the paradox is that computer scientists have much stronger testing requirements in place to be sure their products are safe and reliable before they are released to the market than is true in biotechnology. Druker states that computer engineers are astounded when they learn how many biotech processes are carried out with relatively little precision and understanding of the underlying codes being altered, and virtually no understanding of possible long-term consequences. As one prominent scientist commented, biotech is more like bio-hacking than engineering.

Have Humans Suffered any Harm from Bio-engineering?

In 1989, reports began to surface about an alarming kind of illness characterized by extensive severe muscle and body pain that progressed to heart failure and/or paralysis in some cases. Treatment was not very effective, and the cause of the disease was a mystery that baffled doctors. Eventually the Centers for Disease Control traced the probable cause to a supplement named L-tryptophan (LT), an essential amino acid for humans. By the time the epidemic ran its course, it had affected between 5,000 to 10,000 people, of whom at least 80 had died. About 1,500 victims had been permanently disabled.

Yet LT had been taken as a health supplement for many years without any problems, It was recommended by doctors to relieve stress or treat insomnia. Why had it suddenly become so deadly? Eventually, the source of the problem was tracked down to one of the six Japanese manufacturers that supplied LT to the U.S. market. What distinguished the LT made by this firm? It turned out that this firm was the only one using genetically engineered bacteria to produce L-tryptophan.

Other firms also used bacteria in a fermentation process to produce L-tryptophan, but in 1984 this particular firm began using strains of bacteria that their scientists had genetically engineered to increase the yield of LT. By 1988 the firm was using Strain V, which produced a four-fold increase in LT yield. Strain V was later found to also produce more contaminants than any other strain. The evidence suggests that one or more of these contaminants was toxic for humans, triggering this disastrous epidemic.

The biotechnology industry was alarmed by this epidemic because of the threat it posed to the industry. When a few dozen cases of the disease were retrospectively found to have occurred before 1988, the industry seized on this as proof that the cause must have been something other than the genetically engineered bacteria, and the FDA agreed. Yet, when all the facts were dug up, it turned out that all the pre-epidemic cases were linked to LT made by the same Japanese firm, using earlier strains of genetically engineered bacteria. This information was buried in FDA secret files for years, allowing the mistaken impression to prevail that genetic engineering could not have been a factor in the epidemic.

The Biggest Fraud in the History of Science

Druker concludes his book by stating that the promotion of genetically engineered (GE) foods is the biggest fraud in the history of science. In addition to the harm caused by this extensive fraud, he says that science itself has been damaged by the truth-twisting that’s been done to promote GE foods.

Druker’s book deals with complex scientific issues and is very technical in places, but I recommend it for anyone who wishes to dig into the nittygritty of GE foods. It has won high praise from many top scientists. Jane Goodall, the biologist who won fame for her groundbreaking work with chimps, sums it up succinctly: “Steven Druker is a hero. He deserves at least a Nobel Prize.”