The Starch Solution is a recent book by Dr. John McDougall. The book and the author are both somewhat controversial as they cut across the grain of much conventional medical thinking. Despite this, or perhaps because of it, the book is worth reviewing. Dr. McDougall doesn’t mince words as he makes his position crystal clear. In the process he makes a strong case for rehabilitating carbs that have been much maligned in the low-carb diet fads sweeping across the health landscape in recent years. 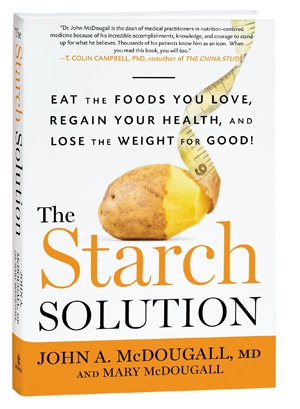 It’s worth taking a quick look at Dr. McDougall’s background. Growing up in a blue collar family in Detroit, he suffered a massive stroke at age 18 that caused severe left-sided paralysis for two weeks. (Fifty years later, he still walks with a slight limp, though he is otherwise fit and trim.) He didn’t connect the stroke with his heavy intake of meat and dairy products that made him fifty pounds overweight, nor did his doctors. Indeed, his mother prepared his meals according to the best nutritional advice of the time: Eat lots of protein and dairy foods.

The severe stroke he suffered at such a young age sparked McDougall’s interest in medicine. After obtaining his MD degree he went to Hawaii for his internship and, a few years later, his residency in Internal Medicine. After his internship, he worked for a large sugar company for three years, taking care of 5000 workers and their families. His patients responded well to treatment for acute injuries and illnesses, but he was frustrated because the pills he prescribed for their chronic diseases did not cure them. No matter how carefully he adjusted their medications, their chronic ailments persisted.

He entered the University of Hawaii’s Medical Residency Program to learn better answers for these problems. What he learned was that the top medical scholars and practitioners in the world had the same kind of results. No one could cure non-communicable chronic diseases. As McDougall researched the medical literature and reflected on his experiences as a sugar plantation doctor, he gained an insight that revolutionized his later medical practice.

The older workers at the plantation had emigrated from Asian countries where rice and vegetables were their basic foods, and they continued to eat the same way in America. Their children began eating more American-style foods, and their grandchildren totally adopted the Western way of eating lots of meat, dairy and processed foods. What struck Dr. McDougall was that the oldest generation of workers stayed trim and healthy into their 90’s, while each successive generation became heavier and less healthy. The youngest generation suffered the most from major chronic diseases. This pattern was not isolated to a few families. It was a trend across thousands of immigrant families.

After his extensive research and training as a specialist in Internal Medicine, McDougall developed his program of plant and starch-based therapy, documenting his results carefully. His work at St. Helena Hospital (a leading heart surgery center in California’s Napa Valley) had remarkable results. Patients dropped weight and attained lower cholesterol, blood pressure and blood sugar levels consistently. They also experienced relief from indigestion, constipation, arthritis and other chronic ailments.

McDougall established his Residential Program in Santa Rosa, California in 2002. The program’s foundation is a wholesome vegan diet that consists of starchy grains and foods like potatoes, rice, beets, carrots and many other veggies and fruits. It does not include any meat or dairy foods. Processed foods are minimized. Patients who adopt his program experience rapid improvement in their symptoms and overall health. Most of them can go off medications previously required. McDougall has documented dramatic improvement in thousands of patients who have gone through his program.

Skeptics wonder how his program can satisfy protein and calcium requirements for good health without any meat or dairy foods. Dr. McDougall responds to such concerns in two chapters, with well-researched answers to questions about protein and calcium. He goes into the history of protein research and cites solid scientific evidence showing that herbs and vegetables satisfy all the protein requirements for humans and many other mammals. He notes that the largest and strongest mammals on earth (elephants, rhinos, hippos and buffaloes) are herbivores.

In regard to calcium, McDougall (and other scientists) point out that the high dairy consuming nations of the world have the highest rates of osteoporosis and hip fractures, while the lowest rates are found in countries that have the least meat and dairy consumption. Calcium is very important to health, but it is best absorbed and metabolized from whole plant-based foods. In terms of effectiveness, greens are among the best sources of calcium for humans.

I attended one of Dr. McDougall’s weekend Scientific Programs a few years ago, and was solidly impressed with the caliber of his speakers and their presentations. I was also impressed with the vegan meals provided at the program. They were all based on Mrs. McDougall’s recipes, and they were delicious. Everybody who attended raved about the food. (Favorite McDougall recipes can be found in chapter 15 of The Starch Solution.)

Although I agree with most of what Dr. McDougall says in his book, I have three minor caveats. First, he is too restrictive when it comes to vegetable oils. His program doesn’t permit any, but evidence suggests that small amounts of mono-unsaturated oils are beneficial to health. Good vegetarian sources include avocado, flaxseed and olive oil.

Surprisingly, Dr. McDougall downplays sugar hazards, but evidence that excess sugar is toxic to the body is now overwhelming. The American Heart Association recommends limiting added sugar to no more than 6-9 teaspoons daily (six for adult females and nine for adult males.)

Finally, Dr. McDougall devotes a chapter to discuss his reasons for not eating fish. I agree that eating fish has some problems associated with it, but the health benefits of eating a small serving of fish such as wild Alaskan salmon once or twice a week are well documented.

Otherwise, Dr. McDougall’s nutritional approach is solid. I recommend his book for many reasons, not the least of which are the recipes found in the book. They are a valuable resource for anyone wanting to try vegetarian cooking!