I took a round-about trip during the last ten days of October and first half of November to visit family and attend a couple conferences along the way. I put 4000 miles on my little Toyota pickup as I traveled to Florida, Nashville, Indianapolis, and then back to San Antonio. While in Indianapolis, I also took a quick flight to and from Baltimore to attend a special lecture at Johns Hopkins. At age 79, it may have been foolhardy to embark on such a lengthy trip, but I found enough gems along the way to make it most worthwhile. Here’s a quick recap.

In Florida I re-connected with family and many friends. It was great staying with Amy and Paul (my daughter and son-in-law) and their teenagers. The day after I arrived, Paul and I had a fun tennis match with old friends Leo Curtin and Steve Barnes. The next day I saw many more good friends at Unity of Citrus County – too many to name. Later in the week, Dave and Betty Davis took me for a hike on a beautiful new trail in the Withlacoochee Rails-to-Trails State Park. The weather, the scenery and the companionship were great. A few days later I traveled to Fernandina Beach to see my sister Lois and her family. It was a quick but wonderful visit.

My unique new contact was Dr. Dustin Rudolph, a practicing pharmacist who wrote the recently published book, The Empty Medicine Cabinet. When I read his book, I was charmed to find a pharmacist who advocated living so well as to make pills unnecessary. We met for lunch in New Port Richey and then talked for over two hours. Dustin is authentic. In addition to his book, he gives many talks. His website is a good resource. His theme is that medications are more hazardous than most people realize. Most illnesses can be prevented or reversed by a truly healthy lifestyle. Whenever this is true, most medications can be avoided. I highly recommend his book and website.

Gems from the American College of Lifestyle Medicine (ACLM) Conference

The 2015 ACLM conference was held in Nashville, Tennessee from November 1 – 4. Always excellent, this year’s conference was the best yet. It’s impossible to summarize all the excellent presentations in this newsletter, but following are a few gems from the conference.

Dr. David L. Katz, founder of the Preventive Research Center at the Yale University School of Medicine, Director of the Integrative Medicine Center at Griffin Hospital, and ACLM President, gave the keynote speech. Always eloquent, Dr. Katz told us that our problem today is not lack of knowledge. We have solid scientific knowledge that healthy lifestyles can prevent over 80 percent of chronic illnesses and associated medical costs. Our problem today is the gap between what we know and what we do. Dr. Katz founded the True Health Coalition to attract people to healthy change. About 200 top health leaders from over 20 countries around the world are helping him direct this initiative to change our culture and our world.

Gems in the “Blue Zones”

“Blue Zones” is the label for a few communities around the world whose elders live with vim and vigor to record-setting ages, often beyond age 100. Dan Buettner researched this with his team and reported it in National Geographic and in subsequent books. He gave us a spell-binding talk about his findings. Four out of the five communities are remote and partially insulated from prevailing world trends. Basically, the local culture in each of them involves healthy living, with elders remaining active and respected in their work. Purposeful living and lifelong support from close friends and community were key factors for most of these centenarians.

Loma Linda, California was the only original “Blue Zone” community in the USA. Dr. Ellsworth Wareham, a 101-year old retired heart surgeon from Loma Linda University, was the featured guest at the Tuesday evening banquet. He pioneered open-heart surgery at Loma Linda and was later honored by Presidents Johnson and Nixon for his work to help Pakistan, Saudi Arabia and Greece develop open-heart surgery units. After retiring as chief surgeon at age 74, he continued to assist in open-heart surgery until age 95. When asked about the secret of his long productive life, he attributed it to healthy vegan eating for over fifty years and to being purposefully active. He’s still does much of his own yard work. 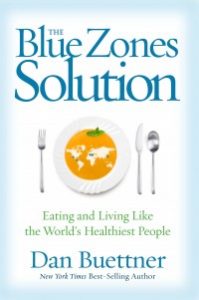 Dan Buettner’s newest book is the The Blue Zones Solution. His project is to create more American Blue Zones. Interested communities are being transformed by following the principles he writes about. The final sections of his book outline how you can build your own personal Blue Zone. I bought this book and recommend it for anyone interested in learning more about Blue Zones.

Individual change is difficult. Several speakers emphasized the importance of group support and a supportive community context. Dr. Dean Ornish has documented the value of group caring and support in his program, proven to reverse heart disease through healthy lifestyle changes. It took him 16 years to convince Medicare that his program was better than open heart surgery. Now Medicare and other insurance companies cover patients for the Ornish program.

Dr. Frank Hu of Harvard University gave a talk on “Controlling the Global Obesity Epidemic.” Harvard’s large-scale research studies show without doubt that food choices are a major factor in our obesity epidemic. Individuals wanting to make changes in their food choices need supportive communities. Otherwise they face a high rate of failure. Many other speakers spoke about various aspects of behavior change. What I took away from this conference was greater appreciation for the value of family and community support for healthy living. Trying to be a lifestyle “Lone Ranger” is not easy.

While in Nashville, I also met Dr. Doug Heimburger and Carol Etherington at Vanderbilt University’s Global Health Institute. Both are involved with many global health initiatives. Dr. Heimburger is mentoring Kidane Sarko in Vanderbilt’s Master of Public Health program. Kidane is a young man I know from Ethiopia who graduated from Taylor University this year. It was good to see him doing well at Vanderbilt under Dr Heimburger’s inspirational guidance.

I had never met Carol Etherington before, but we have a common interest in the Wandikweza project in Malawi. Carol is bringing Mercy Chikhosi Nyirongo, the founder of Wandikweza, to the USA in February to talk about this marvelous program. She created it to empower Malawi villagers to improve their health and their lives. I heard her speak at Africa University and later visited her program in Malawi. It is one of the best grassroots programs I have seen. Mercy graduated from Africa University several years ago. Her work is a beautiful example of the impact Africa University graduates are having in Africa.

A program at the Johns Hopkins Center for a Livable Future (CLF) brought me to Baltimore on November 9th. Patrick Holden, the Founding Director of the United Kingdom’s Sustainable Food Trust, spoke on Soil, Food and Health at the 16th Annual Dodge Lecture. Eminently qualified on this subject, he has had a community farm in Wales since 1973 and was the founding chairman of the British Organic Farmers in 1982. He was awarded the Commander of the Most Excellent Order of the British Empire (CBE) in 2005 for his services to organic farming.

His lecture, with an analysis of the intricacies involved in Soil, Food and Health, was superb. I was struck by his comparison of the plant’s root system to the human gut. I had never heard that analogy before, but it’s right on target. A plant’s root system interacts with its surrounding microbiological environment in a way similar to the way the gut interacts with its microbiome. Both systems are deeply affected by their microbiomes as they absorb nutrients essential for health. Both do best in a healthy environment that includes a healthy microbiome. Healthy soil is immensely valuable for both plant and human health!

Patrick Holden is a friend of Prince Charles, who spoke On the Future of Food in Washington DC in 2011. I’ve read the Prince’s speech and appreciate the insights he gained from years of study of the natural world, as well as from his practical experience in organic farming in Wales for over 30 years. He states that industrial agricultural practices are simply not sustainable. They’re depleting soil health, water resources, and biodiversity, and are endangering our future in the process. Human capital and human health are ultimately dependent on the health of Nature’s capital (healthy soils and biodiversity.) This needs to be understood by our economists and world leaders. Eventually, we must all get it, or we may not survive as a species. 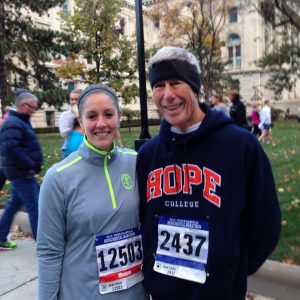 My final stop was to visit family in Indianapolis. My two sons and their families live there, and several married grandchildren have established homes there. It was great to see them all. My son Jeff registered for the Indianapolis Monumental Marathon months ago and planned to run it with his oldest daughter, Meagan, but he injured his knee the week before. He asked me if I wanted to take his place, so I walked the mini-Marathon route while Meagan jogged. (With over 17,000 runners. I started so far back that it took ten minutes for me to reach the starting line!) I had not trained for a half-marathon and the last couple miles were rough. What a boost it was to have family cheering me on for the last mile!

That evening we had a family dinner at the Abyssinian (Ethiopian) Restaurant, and we had a wonderful time as we enjoyed our food and reminisced about family stories.

My oldest granddaughter and her husband (Rachel and Eric) were not able to make the family dinner because Rachel was in the hospital, not as a physician (which she is), but as a patient. She was in labor, and just before midnight, she gave birth to Elsie Joy, their first child and my first great-grandchild. This capped the day in a beautiful way. What a joy she is for all of us!

While in Indianapolis I also saw several good friends. I knew Ruth and Riley Case sixty years ago at Taylor University. It’s been great to maintain that friendship through the years, and it was wonderful to have a good visit with them again on this trip. I also had lunch one day with Dr. Gilbert Wembodinga. We became good friends at Africa University, and I was glad to see him again in Indianapolis.

The last leg of my trip from Indianapolis to San Antonio was about 1200 miles long, involving a two-day drive that I wasn’t keen about. To my surprise, a couple days before leaving, Randall (my oldest son) asked if I would like to have him come along and share the driving. Wow, would I ever! What could have been a grind turned into a fun relaxing trip as we shared the driving and talked about a multitude of subjects. When we reached home, Carol had a delicious supper waiting for us, and it was wonderful to be home with her again.

The great truth I confirmed on this trip is that family, friends and community are all precious gems!