The Candid Truth about Candida

A reader sent me a question recently about yeast infections because an acquaintance of hers attributed all her chronic health problems to yeast infection. After answering my reader’s question, I decided that it would be a good idea to make this the subject of this month’s Wellness Newsletter. Read on!

Yeasts are common one-celled living organisms that are inextricably tied in with human history. They belong in the fungal family that, along with the animal and vegetable kingdoms, forms one of the three major categories of life. There are thousands of species of fungi, including mushrooms, molds and yeasts. All of them are found in soil and their spores spread everywhere throughout the atmosphere, both outdoors and indoors. 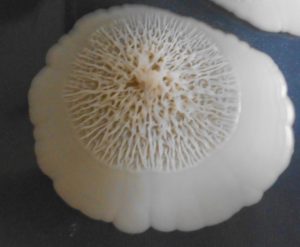 An opaque colony of Candida albicans

Over 700 species of yeast have been identified, but more than a thousand species probably exist. More are being identified all the time. Humans accidentally discovered some of the benefits of yeast thousands of years ago. Fermentation by yeast allows bread to rise and makes wine from grapes. One legend has it that early bread-makers learned to put pans of dough outside for a few hours to collect enough yeast to make it rise.

The Candida yeast family has over 200 species in it. One of the most common is Candida albicans. It’s a cause of human infections, but it’s also found in most healthy humans – a key point to keep in mind. It’s normal to find it in the mouth and the intestinal tract in over 80 percent of healthy adults. In most cases, it gets along with the millions or billions of “good” bacteria without causing health problems.

When do we get colonized by Candida? Very early in life. Most babies are inoculated with Candida as they are being born or very soon afterward. Candida prefers warm moist environments with a neutral or acid pH, so it loves living in the mouth and the gastrointestinal tract. It is also found on the skin, particularly in warm moist areas such as the armpits, genital areas and among the toes. (It, or its fungal cousins, can be cultured from a third of socks and undershorts worn for a day or more.)

A small percentage of babies and elderly adults get a type of candida infection called Oral Thrush. This shows up as whitish patches on the palate or tongue, and is due to an overgrowth of candida, perhaps due to impaired immunity. In many cases it clears up spontaneously, but occasionally requires treatment with an anti-fungal agent. If it persists it’s wise to consult a doctor. This is also true for persistent fungal skin infections.

The most serious kind of candida infection is called systemic candidiasis. This occurs when overgrowth occurs in the gut to cause leaky gut syndrome, or when yeast invades the blood stream to infect other internal organs, or as a late complication of invasive procedures such as placement of catheters or other prosthetic devices. Most of these problems are due to impaired immunity or to complications caused by medico-surgical interventions.

I won’t discuss these problems in detail, but a few points are worth making. Impaired immunity can be due to immune-damaging illnesses or serious nutritional deficiencies. It can also be due to medical treatment, including prescription of immune-suppressing drugs or the overuse of antibiotics.

The antibiotic issue is particularly troubling. Antibiotics may kill off billions of “good” bacteria in the gut whether they succeed in knocking out the “bad” actors or not. The die-off of the good bacteria in the gut allows yeast to overgrow and become an agent of disease itself. Overuse of antibiotics can also lead to antibiotic resistance and diminish their effectiveness against disease-causing bacteria. It’s a triple whammy!

Candidiasis has become a growing problem in hospitals over the past few decades. Intravascular catheters left in place for a few days are vulnerable to biofilm colonization with a mixture of yeast and bacteria. Endotracheal tubes and urinary catheters are also vulnerable. Urinary catheter-associated infections are the most common infections acquired in hospitals and nursing homes.

In short, systemic candidiasis is fostered to a great extent by modern medical and surgical processes. Systemic treatment with anti-fungal medications is possible but is fraught with side-effects and complications. As usual. the best defense is prevention, but the path is a bit tricky even here.

Dr. William Crook wrote The Yeast Connection in 1983. He became convinced in his clinical practice that yeast was the cause of many ill-defined symptoms in many people. He developed “The Yeast Questionnaire” and the “Yeast-fighting Diet,” and he had success in treating many people. In addition to his diet, he recommended using probiotics, consisting of “good” bacteria to help repopulate the gut with friendly bacteria. He also advised reducing exposure to many environmental chemicals that may interfere with good health.(1)

Dr. Crook died in 2002, but his program continues through “The Yeast Connection” website, which is actively maintained by his followers. In a way, Dr. Crook was an advocate of a healthy lifestyle but it was incomplete. My view of his work is that he was helpful to many, but that his tunnel vision about the yeast connection limited his perspective.

Another website dedicated to fighting yeast infections advocates the use of a specific probiotic complex called “Threelac.” This consists of three “friendly” bacterial species in a formula developed by Japanese researchers a number of years ago to allegedly destroy yeast organisms. The concept of repopulating the gut with good bacteria is valid, but a problem with this formula is that one of the species used was Enterococcus faecalis. It is found in the normal human gut, but it has been found to develop antibiotic resistance and can make people sick. Several governments have put restrictions on the use of Threelac because of this.(2)

My summary: Candida is a yeast that is commonly found in healthy humans and in the environment around us. It can be a cause of localized infections that may be troublesome but are not dangerous as a rule. However, it can become dangerous if overgrowth occurs or it’s allowed to invade the body systemically. Impaired immunity and medico-surgical interventions, particularly in hospitals, are major accomplices to systemic candidiasis. Hospitals are life-saving institutions, but they are also risky places in many respects.

Yeast is a common concern, but it should not threaten your life and health.