We discovered pomegranates a few years ago, and fell in love with them once we figured out how to prepare them. They are a colorful, tasty addition to the menu anytime, but they seem especially appropriate for the holiday season. Fortunately, this is also the time of year when they are at their prime. 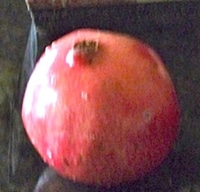 Our first time of trying to prepare a pomegranate was a hilarious disaster. We had no idea what to expect when we cut this colorful fruit open. At first we were surprised by the amount of white pith under the colorful red peel.

Then we saw the deep red seeds enmeshed in the pith, and as we tried to cut away the pith, seeds and juice squirted all over the kitchen. Aside from making a mess, the juice left a stain on anything it touched.

At that point, our reaction was that pomegranates weren’t worth the struggle. Then we decided there must be a better way, so I checked them out on the Internet. There we learned the best way to prepare pomegranate is underwater. No, it didn’t mean putting on our swimming suits, though that seemed like a good idea! What it did mean was to fill a large bowl with water, and then do all the separating of peel, pith, and seeds underwater in the bowl. 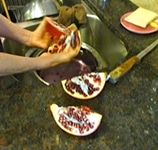 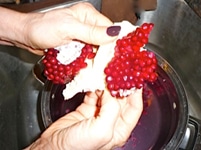 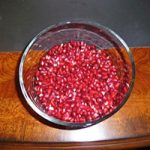 We did this with our next pomegranate, and it was infinitely easier. It left no mess, and not only was it easy to separate the seeds from the pith underwater, but the water helped do the sorting for us. The seeds sank to the bottom of the bowl while the pith floated to the top.

After tossing the pith away, it was simple to pour the bowl of water with seeds through a strainer and pick out the remaining little bits of pith. Voilå – the beautiful seeds were ready for a serving dish!

The history of this fruit is interesting. The name is derived from the Latin phrase, “pomum granatus,” meaning “apple seeds,” or “seeded apple.” It is mentioned in the Bible as well as in ancient Greek texts. Some people have speculated that it was the forbidden fruit in the Garden of Eden. In any case, it is known to have first been cultivated in ancient Persia. It spread from there to other parts of the world. In the USA, it’s now grown in California and Arizona.

The fruit is loaded with potent antioxidants, and it has many health benefits. The fleshy seeds, also called arils, are the edible parts of the fruit. When one bites into them, they provide a tangy, sweet burst of flavor along with a nice bit of crunchiness. We love to put a couple tablespoons of pomegranate seeds on our cereal in the morning, along with sliced bananas and strawberries. They are also good in some salads, as well as mixed into fruit desserts.

Pomegranate juice is another way to enjoy this fruit, but it’s best as the whole juice. If you get juice, make sure it is one hundred percent pomegranate juice, and that it does not have sugar in it. That counteracts many of its health benefits.

Purple potatoes are a new addition to our dietary repertoire. As with pomegranates, they have been around for ages. I became aware of them only recently when Carol asked if I could find some at our supermarket. I was dubious, as I had never seen any, but when I asked the young man in “Produce” about them, he led me right to a small shelf that I had never noticed before, and there they were.

As a sidelight, I thought I knew our produce department well, because that’s where I spend most of my time when I’m grocery-shopping. I guess this shows the truth of the old saying that you only start seeing something after you become aware of it. Now I see purple potatoes in every grocery store I visit. Most of the time, they’re small, fingerling-type potatoes, but sometimes I see larger ones, about the size of medium red potatoes. 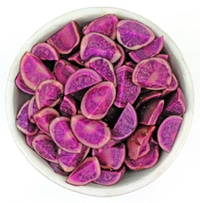 Unlike red potatoes, which are white under the skin, purple potatoes are purple throughout, with the flesh being just as purple as the skin. They are high in anthocyanin, a beneficial antioxidant found in many richly colored fruits and vegetables. It is one of 300 anthocyanin antioxidants that belong to a broad group of over four thousand flavonoids, all of which are found in plants. Research is ongoing, but most of these have positive health effects.

The levels of anthocyanin in purple potatoes are about three times higher than in white potatoes, and this gives them a nutritional advantage. (Contrary to much popular opinion, white potatoes do have nutritional benefits. It’s when they’re loaded with butter, cheese, gravy, or creamy sauces that eating them can become health-hazardous.) In any case, eating purple potatoes is better than eating white potatoes to boost the immune system and fight inflammation.

Purple potatoes can be fixed in just about as many ways as white potatoes. We like them cut into wedges, brushed with olive oil and rosemary sprigs, and baked in the oven at 375 degrees for 25 minutes. They are delicious, with a rich potato-like taste. Baked like this, one gets all the nutritional benefits to be found in them. Recent research shows that purple potatoes are even helpful in lowering blood pressure.

There are many sub-varieties of purple potatoes. Cultivated in mountainous regions of Peru and Bolivia nearly 8,000 years ago, they were considered the food of the gods, and they were reserved for Incan kings

If you are game for some dietary adventure, and have not had pomegranates or purple potatoes before, try one or both of them this holiday season. You will be treating yourself like royalty!