My Students Inspire Me! 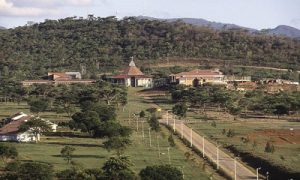 I’m still at Africa University as I write but will be here only one more week. My visa expires on April 29, so I’m flying back to the States on that day and will arrive home in San Antonio the next day. I’m looking forward to getting home and being with Carol again. I’m also looking forward to seeing most of our family when we all gather in Fort Wayne for my grandson’s wedding. Reid and his fiancée are getting married May 26th. It will be a grand occasion and a wonderful reason for the family to get together.

I have enjoyed my time in Zimbabwe immensely. Teaching at Africa University has been an enriching experience for me, and it’s been a joy to teach our students in the Faculty of Health Sciences. They are keen students, absorbing everything I have to teach them. I’m looking forward to returning to teach here again next year.

In my newsletter this month, I’m sharing the stories of a couple of these students. Before getting to that, my book, The Power of Lifestyle, is now in manuscript form and should be published this summer. It’s getting encouraging reviews from a few people who were asked to preview the book before publication. I’m looking forward to teaching a class on this subject at the College of Central Florida in October. If any of you wish to have me speak or lead a workshop based on my book in the coming year, please let me know!

Leon (a fictitious name) is a student who is studying for a Bachelor’s degree in Health Services Administration here at Africa University. Leon’s mother died in 2003, and his father followed her in 2007, both dying of AIDS.

His uncle took him into his family and cared for him like a son. He saw to it that Leon attended good schools, even paying for his first year at Africa University. That was a very strong commitment.

His uncle could not afford to pay Africa University’s fees after the first year, but Leon enrolled in the second year classes purely on faith. Africa University let him attend lectures, also on faith. AU has an unusual policy of allowing students to attend classes for a semester even if they haven’t been able to pay their fees, but students are not permitted to take final examinations in any course until the fees are paid. An anonymous benefactor helped Leon, paying his academic fees in time for him to take his finals. Otherwise, his work this year would have been in vain.

Leon is motivated to do well because of his family history. He wants his community to be healthy, and he plans to exert his best efforts toward that goal. Most students want this also. In my classes on non-communicable diseases, I teach about Africa’s growing burden of ailments like heart disease, diabetes, high blood pressure, stroke, cancer, and other chronic diseases, emphasizing what people can do in their own lives to help prevent these disorders.

Most students never before understood the power people have over their own health. They thought health was just something that happened, and that it was up to their doctors to keep them healthy. The concept that people have a major degree of control over their own risk factors for non-communicable diseases was brand new to them.

During the last week of classes, I ask students to prepare a paper and give an oral presentation on what they will do to optimize their own health, and what they’ll do to help people in their communities enjoy good health. It’s gratifying to see that students have absorbed the lessons about the power of lifestyle to determine present and future health.

Leon’s plan for his own health and his community’s health was well thought-out. His presentation was excellent.

Charlie was born and raised in the Democratic Republic of the Congo (DRC). He did well in school, got married to a nurse, and enrolled in medical school himself.

Then, in the political turmoil and factional fighting that occurred in the DRC about ten years ago, his parents and siblings were killed. Charlie and his wife barely escaped with their lives, and they became refugees, finally ending up in a United Nations refugee camp in Zimbabwe.

After existing in the camp for a few years, Charlie wanted to return to school. Resuming medical school was not an option, but he was able to enroll in the Bachelor of Science program in Health Administration at Africa University. His first year of intensive English (needed because he was French speaking) was paid for through a volunteer agency, but then that source of funding dried up. His next year was partly paid for by a church that heard about his plight. Then he won a scholarship that took care of most of his university costs thereafter.

Charlie is doing well in school despite his life stresses. His and his wife and two children still live in the refugee camp when he is not on campus. The refugee camp has a few thousand displaced refugees who have no country and no place to go. Charlie and his family will eventually leave the camp after he graduates and gets a paying job, but he says returning to the DRC will never be an option. He’ll live and work wherever he can find a job.

Although he had been a medical student, Charlie did not know that control of his future health was largely in his own hands. Now that he understands the power of lifestyle to control his major risk factors, he is determined to maintain as healthy a lifestyle as possible in the future. He wants the same for his family and for his future community. Like Leon, Charlie’s presentation of his health plan in class was superb.

“Reflection of Joy” by Bernard Ndichu Njuguna of Kenya

The Africa Center for Lifestyle Excellence

I don’t want to leave the impression that all my students at Africa University have heart-wrenching stories. Many do, but some come from comfortably stable families. They come from a variety of backgrounds, with over twenty-five African countries represented at AU. It is an ideal place to teach the power of lifestyle while stressing the value of diversity. Students see many different cultures interacting here, but they also experience a great sense of unity.

This unique place was created because a few people had a vision that many others caught. Now thousands reap the benefits of that dream as they study here and then spread the light of that dream across the continent of Africa.

Now a new dream is being born: A dream of Africa University becoming a center of lifestyle excellence that will spread its influence around the world. It is a dream, but it’s becoming a reality as students catch this vision and put it into practice wherever they live and work. Leon and Charlie have caught this vision!

If you would like to learn more about this vision, please visit the Foundation for Healthy Africa’s web page.