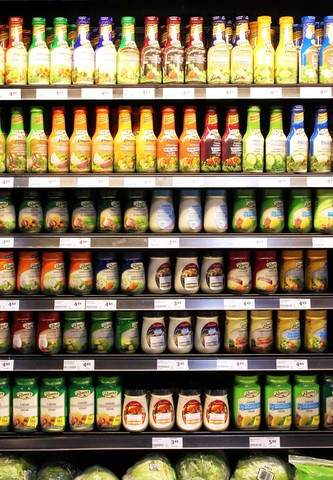 Emulsifiers are chemicals that allow fluids like oil and water to be mixed together into one stable solution. Polysorbate-80 and carbo-xymethylcellulose are two commonly used emulsifiers in foods like mayonnaise, salad dressings, ice cream, and many other processed foods. Emulsifiers are considered a crucial food ingredient by the food processing industry because they help improve the texture and shelf life of all kinds of food products.

The commercial use of synthetic emulsifiers in foods began in the 1930s and expanded rapidly over the next 50 years. Today there are many kinds of food emulsifiers, with hundreds of thousands of tons being produced every year. They are generally recognized as safe for human consumption, but recent research raises questions and concerns about this.1

Research reported in the March 5, 2015 issue of Nature showed that emulsifiers cause significant digestive disruption in mice. Polysorbate-80 and carboxymethylcellulose were added to the diet of one group of mice for twelve weeks in doses equivalent to those consumed by humans in processed foods. These mice gained weight and developed intestinal inflammation that did not occur in the control group of mice.

Intestinal bacteria in the emulsifier-fed mice penetrated into the intestinal lining instead of staying in the intestinal channel where they normally work. The immune systems of the mice reacted against the invading bacteria, causing inflammation in the gut. Abnormal weight gain also developed in these mice. The control group of mice did not develop these changes until colonies of the invasive bacteria from the test mice were transplanted into them. Then the control mice also developed intestinal inflammation and weight gain.2

How Could Emulsifiers Do This?

Normally a thick layer of mucous covers the entire inner lining of the intestines. Humans have over 100 trillion bacteria in their intestines. Most of the time, these bacteria do their work in the intestines without causing any problems. One reason for this is the thick mucous layer that protects the intestinal lining, keeping trillions of gut bacteria from attacking it. Emulsifiers can break down this thick protective mucous layer, allowing bacteria into the intestinal lining and triggering immune reaction and inflammation. This research study showed that this is also associated with weight gain in mice.

But We Are Not Mice

This is a well-designed study published in a highly regarded scientific journal. Yet humans are not mice. The findings from this research study will need to be confirmed by other researchers, and then more research must be done to determine if humans are susceptible to similar damage. Even so, the findings of this research study are of concern. They show that emulsifiers can cause serious problems in mice, and they also reveal a logical explanation as to how this can happen. The inflammation and weight gain in mice is consistent with inflammatory bowel disease and the metabolic syndrome.

The authors write, “Our data suggest that one ubiquitous class of food additives, namely emulsifiers, can disturb the host-microbiota relationship resulting in a microbiota with enhanced mucolytic and pro-inflammatory activity that promotes intestinal inflammation. Such chronic gut inflammation can manifest as colitis or metabolic syndrome. While additional studies will be needed to determine if CMC, P80 and/or other emulsifiers impact human health, our observations in mice suggest the possibility that dietary emulsifiers may have contributed to the post-mid-twentieth-century increase in incidence of inflammatory bowel disease, metabolic syndrome, and perhaps other chronic inflammatory diseases.”3

If these findings are indeed applicable to humans, it would seem wise to minimize the use of synthetic emulsifiers in food as much as possible. I’m already cautious about eating processed foods. I’ll be even more cautious in the future.