Home Reflections from My Twilight Years Love Thy Neighbor: A Muslim Doctor’s Struggle for Home in Rural America

Love Thy Neighbor: A Muslim Doctor’s Struggle for Home in Rural America

Dr. Ayaz Virji is a Muslim doctor who settled in the small town of Dawson, Minnesota with his family in 2013. He graduated from one of our top medical schools in 2000 and completed his medical residency at Duke University Medical Center in 2003. He left an excellent hospital-based practice in Harrisburg, Pennsylvania because he wasn’t happy with the turnstile kind of medicine he had to practice there. He wanted to practice a caring kind of medicine in a rural area where he would be truly needed. He found this in Dawson, population 1400. 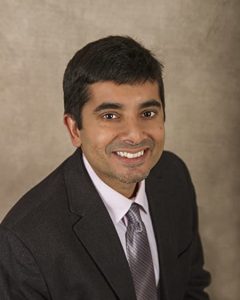 Dr. Virji’s family included his wife, Musarrat, and three children: Faisal, Imran, and Maya. Coming from a large urban area, they had to adjust to small town life, but they quickly fell in love with Dawson. They loved the small town manners, caring neighbors, and the proximity of everything. The kids did well in school. It was a good place to live and raise their family.
Dr. Virji added new services at the hospital, upgraded equipment, and helped oversee a multimillion-dollar hospital expansion. His wife opened a skin care salon that became very popular, with clients coming from neighboring towns and even from as far as Minneapolis, three hours away. The area had clearly accepted and welcomed them.

The 2016 presidential election changed everything. The government began referring to Islam as a cancer, suggesting that all Muslims be put on a registry. Anti-Muslim sentiment and hate speech blew across the country like wildfire, even in Dawson. Alarmed and angered by this sea-change in sentiment, Dr. Virji began thinking about leaving his country, the country that had been his home since childhood.

Mandy France, in her fourth-year at Luther Seminary in St. Paul, was interning at Grace Lutheran Church in Dawson. Getting to know Dr. Virji and his family, she liked and respected them. Unhappy about the negative rhetoric surrounding Muslims after the election, she decided to start an interfaith project to dispel myths and misconceptions about Muslims.

Exploring this idea with Dr. Virji and his family in some depth, she asked if they would be willing to share information about their faith with the community. Trusting her leadership in this, they agreed.

Mandy organized a community forum on the subject of “Love Thy Neighbor” at the Dawson school auditorium. After she posted flyers around town about the event, the school board was flooded with protests. There was outrage that the school would host such an event. One hysterical person said that school children would be marched into the room and forced to watch Muslim propaganda. The biggest fear Mandy heard was that the forum was planned to convert everyone to the Muslim faith. She was accused of being a fake Christian or a closet Muslim.

The school board had previously agreed to rent the auditorium for the forum, but now they began to put up hurdles, including increased rent and refusal to let the audio-visual equipment be used. In the end, the extra demands were met and the event was held on a chilly evening in March, 2017. Four hundred people attended, more than a quarter of the town’s population.

Pastor Mandy introduced herself and explained that the purpose of the interfaith forum was simply to be informative. She emphasized there was no intent to convert anyone nor to make anyone feel less than loved. Then she introduced Dr. Ayaz Virji and his family as the guests of honor.

Dr. Virgi explained his faith, how he practiced it, and what it meant to him. To help make his points clear to his audience, he involved them in an interactive exercise about faith that they enjoyed. Much to his surprise, he was given a standing ovation when he finished. In the days and weeks following the forum, there were many repercussions, both positive and negative.

Montevideo, a larger neighboring town, scheduled a 3-hour anti-Muslim talk by a Christian pastor. One of Dr. Virji’s friends from Dawson attended to see what it was like. He was shaken. Even though he was a Christian himself, he said it was the worst 3 hours he had ever experienced. It was filled with hate for Muslims. Several Muslim families living near Montevideo received death threats in the days following the talk.

Dr. Virji was angered and discouraged by this kind of reaction. Yet he and Mandy also received invitations to give their presentation in other communities. He had mixed feelings about doing this again, but Mandy convinced him that accepting these opportunities was important. They gave several more talks that year.

Then the anti-Muslim speaker was invited back to Montevideo to give another “hate” talk. This struck Ayaz Virji at his core. He was due to sign his renewal as Medical Director of the hospital and free clinic, but he didn’t know if he could continue to live and work with so much surrounding negativity. He would never have come if he had known this kind of experience was in store for him. Yet he also knew that he was needed in Dawson. 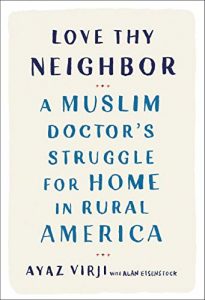 1. Dr. Virgi’s book Love Thy Neighbor: A Muslim Doctor’s Struggle for Home in Rural America ends on the note of hope with which Dr. Virji committed himself and his family to continue living and working in Dawson.

3. The divisions between people in our country and our world today cry out for healing. Love is the healing balm. The fact that the “Love Thy Neighbor” forum has resonated with so many people is encouraging.