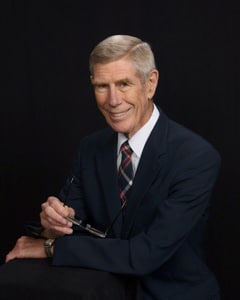 Born in 1936, Ed Dodge grew up as a missionary kid in Angola, Africa. Some of his adventures included living in the wilds of northern Angola, hunting for wild game, and traveling across many poorly charted areas of Africa. He first visited Zimbabwe at age 12 when his parents drove across Africa with their four children to attend a missionary Conference.

When he returned to the United States, much of his career was spent in Florida, where he directed a local health department for a few years and was a family physician for many years. He also served as Courtesy Clinical Associate Professor in the Department of Community Health and Family Medicine at the University of Florida.

After retiring in 1996, Dr. Dodge made numerous Volunteer-in-Mission trips to Zimbabwe over a number of years. In 2010, he was appointed as a volunteer Visiting Adjunct Professor at Africa University in Zimbabwe, teaching in the Master of Public Health program for one semester each year since then.

His years of experience in clinical and public health in Africa and the USA have given him a broad perspective of health challenges in both the developing and the developed world. Through his experiences, he grew to understand the great value of embracing the whole person, body, mind and spirit. Quantum physics and cutting edge research support such a perspective.

In his first book, Tim’s Story: Spiritual Perspective of Health, Dr. Dodge describes this emerging trend in medicine and defines the individual’s responsibility in this new paradigm of health.

His second book, Dan’s Story: One Man’s Discovery of His Inner Health Power, is an absorbing tale about a man with health problems who learns how to tap into his inner health power. The keys to health that he discovers are empowering for anyone who takes them to heart.

Dr. Dodge’s Ten Steps to Exceptional Health was published in 2010. This book outlines the basic steps anyone can take to achieve excellent health.

His next book, Be Healthy: Simple Guidelines for Lifelong Well-Being, was released Jan. 2, 2014. This is an excellent guide to healthy living. Grounded on solid science, its practical approach is welcoming to everyone who wants to take steps toward healthier living. A Wellness Toolkit allows anyone to begin with baby steps that steadily lead to consistent well-being.

The author publishes a Wellness Newsletter and writes a blog on The Joys of Healthy Living.

Dr. Dodge has three children and ten grandchildren. He and his wife live in San Antonio, Texas when he is not doing volunteer work or teaching in Africa.