One morning in early February I heard a “tap-tap-tap” at our back door. Our back yard is fenced in, so this was very unusual. When I went to see who could be knocking at our door, I didn’t see anyone at first. Then a cardinal sitting on the patio floor flew up and tapped the glass door. As I watched, he darted up repeatedly to tap on the glass. 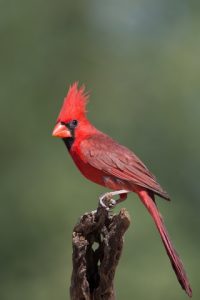 I realized the cardinal was attacking his own reflection in the glass, and I opened the door to shoo him away. This startled him enough that he didn’t return to the door, but it wasn’t long before he began tapping at our large kitchen window. He perched on a branch of the mountain cedar tree just a few feet away from the window, and then launched an attack on his reflection in the window.

Shooing him away from the window only worked for 15 minutes or so before he came back. He saw that his “enemy” was still there and began attacking again. The attacks have continued for a few weeks now, but the cardinal hasn’t learned anything from his repeated failures. In fact, when he’s shooed away from our home, he goes to a neighbor’s house and begins to attack another “enemy” there. This guy’s got enemies everywhere he looks, stressing him out big time. We’re hoping the attacks will stop when mating season is over.

I’ve seen other kinds of birds engage in similar behavior in the past. A young male bluebird began attacking one of our windows about 10 years ago when we lived in Florida, and I’ve seen blackbirds attack side mirrors on parked cars here in San Antonio. The territoriality instinct is strong in the spring, and bird brains can’t seem to learn that the images they see in windows or mirrors are not real. They engage in futile battles against their own projections.

One day when the cardinal had repeatedly dashed himself against the window, I thought: “It’s too bad that these birds don’t learn anything from their unnecessary battles.” Then it suddenly dawned on me that we humans also engage in unnecessary battles or actions sometimes, and, like the birds, suffer needless, self-imposed stress as a result.

I’m often guilty of not allowing myself enough driving time. When traffic gets congested and I’m running late, I feel stressed and blame everything from the weather to poor traffic control. Yet my error is not allowing enough buffer time for my drive. When I have lots of time, traffic congestion doesn’t bother me as it does when I’m under severe time pressure. I know all this, and yet I repeatedly make the mistake of shorting myself on time.

Another mistake I make is to schedule too much to do in any given time frame. Then I get stressed from trying to cram everything into too little time. Workaholics are notorious for putting too much on their plate and then constantly extending themselves to get their work done, sacrificing personal or family time in the process. The philosopher Lewis Mumford suggested that a wise man plans “halos” of time around his activities, giving him more effective use of his time.

And so it goes. Some of the stress in our lives is beyond our control, but some of it is due to our own short-sightedness. To help prevent this kind of stress, I’m building more halos into my schedule. The next time you’re feeling stressed, pause to see if, like the cardinal, you’re fighting a self-imposed kind of battle. It’s much more effective to prevent needless stress than to treat it with medications.

A health crisis based on excessive use of pain-killers has erupted in our country over the past 20 years. The term opioid refers to all medications that act on brain receptors to produce morphine-like effects. These medications are used to relieve pain but are also used by people who have become addicted to opioids. This has become such an epidemic problem that Dr. Vivek H. Murthy, U.S. Surgeon General, wrote a letter to millions of physicians in August 2016 to ask for their help in solving this crisis. I quote parts of his letter here because he describes the problem very succinctly.

“I am asking for your help to solve an urgent health crisis facing America: the opioid epidemic. Everywhere I travel, I see communities devastated by opioid overdoses. It is important to recognize that we arrived at this place on a path paved with good intentions. Nearly two decades ago, we were encouraged to be more aggressive about treating pain, often without enough training and support to do so safely. This coincided with heavy marketing of opioids to doctors.

“The results have been devastating. Since 1999, opioid overdose deaths have quadrupled and opioid prescriptions have increased markedly – almost enough for every adult in America to have a bottle of pills. Yet the amount of pain reported by Americans has not changed. Now, nearly 2 million people in America have a prescription opioid use disorder, contributing to increased heroin use and the spread of HIV and hepatitis C.”

The opioid problem is huge and complicated, but as the Surgeon General suggests, it is solvable. Wiser prescribing and improved patient education about pain-killers will help. It’s smart to taper these medications down fairly quickly. Even though pain is not desirable, it’s an important signal letting us know that a problem exists. Masking this signal with pain-killers can make the problem worse. If someone has an injury, pushing oneself to keep going without correcting the underlying problem may make it worse. Yet that’s what can happen if the pain is masked by pain-killers.

An extreme example of this is the loss of fingers and toes in patients with chronic leprosy. The loss of fingers and toes is not caused by the infection. It’s caused by these patients continuing to damage their hands and feet in spite of injury. They have lost all sense of pain, so they don’t realize they’re injuring themselves until it’s too late and the damage is done. Pain is a very useful signal! So, how should one manage pain?

Severe pain should be treated while the underlying cause is being corrected. However, as noted above, it’s wise to taper off pain meds reasonably quickly as healing is taking place. Continuing on pain-killers for too long courts the danger of sliding down the slippery slope of addiction. In my view, it’s better to tolerate a little pain than risk becoming addicted. I feel so strongly about this that I take no pain meds for mild to moderate aches and pains. Like most people, I experience my share of chronic pain, having had a lumbar disc injury over 35 years ago. My daily low back pain ranges from +1 to +4 (based on a 1 to 10 rating scale,) but it’s not incapacitating. Prolonged sitting puts more pressure on my lower back, but the pain usually goes away completely when I walk. Rather than take any pain meds, I much prefer to go for a walk! 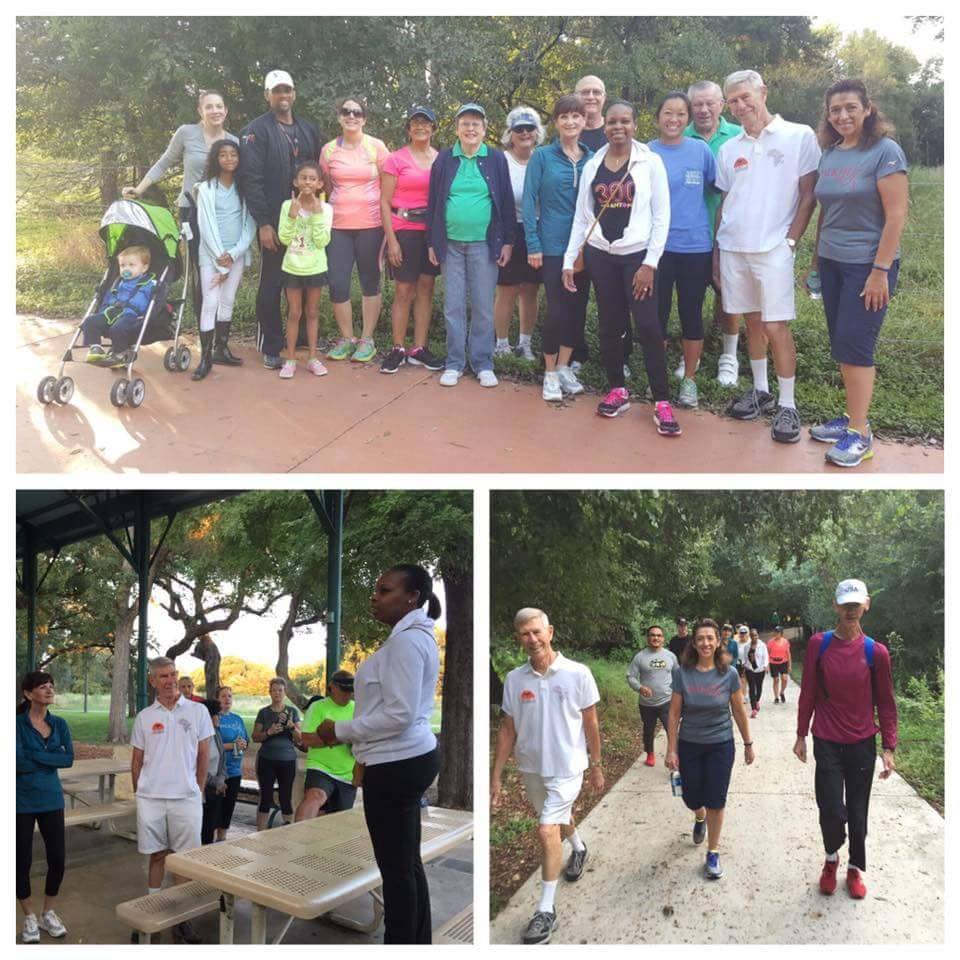 Walk with the Mayor

San Antonio’s Mayor Ivy Taylor schedules a “Walk with the Mayor” on the last Saturday of every month. These walks are organized by the Mayor’s Fitness Council, but the mayor herself is actively engaged in them. I’ve been on the last three walks myself, after learning about them from Bert Pickell, Director of “San Antonio Walks.” The mayor arrives a few minutes before the 8 a.m. starting time, and she gives a short pep talk before Bert leads us all down a walking trail at a good pace. Each of the walking events I’ve attended lasted about an hour, with anywhere from 20 to 100 enthusiastic walkers of all ages. I’m told that several hundred walkers have been at some events.

I’m impressed with this fitness program led by the mayor and the Mayor’s Fitness Council. Not many mayors of large cities are so personally committed to encouraging fitness for their citizens. I commented to one of the staff as we were walking that if this kind of fitness program became popular in communities across the nation, it would do much to improve our nation’s health, especially if combined with healthy nutrition. Wouldn’t it be great to see people across the nation take ownership of their health this way?

Dr. Greger is one of the most nutritionally knowledgeable physicians in the world. He and his team scour the scientific literature every month, reviewing thousands of articles to keep abreast of all scientific and medical research on nutrition. He also writes a daily blog to keep his readers informed about any updated information. Following are my brief summaries of a few of his recent blogs. I hope you find these tips helpful. My thanks to Dr. Greger for sharing his insights so freely. His daily blog is found at NutritionFacts.org.

I’ve been adding a tablespoon of nutritional yeast to my garden salad every day for the past few months and I love the enriched taste it adds to the salad. It’s great to learn that it also helps protect me from the common cold. Nutritional yeast can be found in its powder form in most supermarkets. Unlike Brewer’s yeast or Bakers’s yeast, it’s grown specifically for its high nutritional value. It is not used to brew beer or help make bread rise. 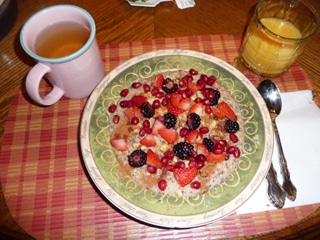 Oatmeal is known to be a very healthy food. It helps lower cholesterol and blood sugar, boosts the immune system, and it has anti-inflammatory and anti-cancer effects. Now Dr. Greger shows us that we can dramatically boost its antioxidant power. Adding a pinch of ground cinnamon, ground cloves, and allspice to a single bowl of oatmeal increases its antioxidant power four or five times higher than the total antioxidants one can get from an entire day’s meals at McDonalds.

I’ve added a generous sprinkling of ground cinnamon to my morning bowl of oatmeal for a long time. Recently, I began sprinkling a little allspice, ground cloves, ginger, and nutmeg into the oatmeal as it’s cooking. Wow! The aroma is wonderful, and with added toppings of sliced bananas, blueberries, strawberries, walnuts, and ground cinnamon, it tastes great. I’m delighted to know that making my morning bowl of oatmeal tastier also boosts its ability to ward off disease.

Amyotrophic Lateral Sclerosis (ALS), also known as Lou Gehrig’s disease, has been increasing around the world over the last 50 years. A recent blog from Dr. Greger about this growing problem states that risk is higher among people who eat lots of fish or seafood on a regular basis. A neurotoxin known as BMAA is produced by certain algae blooms. These algae have been increasing over recent decades due to human activities.

Fish and other sea creatures that consume these algae accumulate BMAA in their flesh. It’s been proven that this neurotoxin is present in the aquatic food chains in areas where ALS risk has been growing. This does not prove that BMAA is the cause of ALS, but it probably contributes to the risk of ALS and a few other neurodegenerative diseases such as Parkinson’s disease. Does this mean that we should not eat fish or other seafood? No, but it’s wise to limit fish intake to once a week or less.

Enough reflections for this report. Look for the next Wellness Newsletter in June 2017. If you have any suggestions to improve the report, please let me know.

Note: The Wellness Newsletter changed from a monthly newsletter to a quarterly publication beginning this year.