Home Diet Is Organic Food Really Worth the Cost?

Is Organic Food Really Worth the Cost?

Most people think that eating organically is a good idea, but many wonder if the benefits are really solid. Until recently, scientific opinion on this question has been divided because there’s not been much hard data to answer it definitively. Now a major scientific article in the British Journal of Nutrition, published just one week ago, gives us clear-cut answers.

The article reports the results of careful meta-analyses carried out by a large international team of agricultural and nutritional scientists. Their detailed review of 343 research studies published in peer-reviewed journals since 2009 is the most complete and extensive analysis of nutrients in organic versus conventional food ever done. Organically raised crops had 17 to 69 percent higher levels of many antioxidants than comparable conventional crops.

Many of these antioxidants have been linked to a lower risk of many chronic diseases that plague our society, such as heart disease, stroke and cancer. Finding higher concentrations of these protective antioxidants in organic foods makes these findings highly significant from a health perspective, as well as in terms of nutritional quality.

A surprise finding was that cadmium levels were much higher in conventional foods than organically grown foods, probably due to the types of fertilizer used for conventional crops. Cadmium is a toxic heavy metal that concentrates in the liver and kidneys. Accumulation in the body over a lifetime may have a seriously adverse impact on health.

The authors of the study concluded that organic crops have higher concentrations of antioxidants, lower concentrations of cadmium, and a lower incidence of pesticide residues than comparable conventional crops. They found that this held true across all regions and production seasons. It was not an isolated kind of finding!

Smart agricultural policies should favor the growth of organic crops over conventional crops as opposed to the reverse situation that prevails today. Entrenched political lobbies prefer the status quo to smart policy, so it will take a sea change in public opinion to have any impact on these policies. That kind of systemic change doesn’t usually happen quickly.

What can an individual do in the meantime? A good suggestion is to become familiar with the “Dirty Dozen” and the “Clean Fifteen” lists of grocery produce. 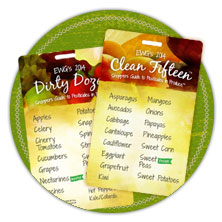 The “Dirty Dozen” are the dozen foods most heavily contaminated with pesticides, whereas the “Clean Fifteen” carry little or no pesticide residue. The Environmental Working Group (EWG) has published these lists for nearly fifteen years, updating them every year. It’s best to buy (or grow) any of the “Dirty Dozen” organically, even if they cost more. With the “Clean Fifteen,” this is not as much of a concern. I usually follow this rule in my own grocery shopping. Yet I must confess that I have often bought conventional Bell peppers and potatoes, even though they are part of the “Dirty Dozen.” Since reading the new scientific findings discussed here, I’m changing that practice immediately!

To see these lists, click on the link to the EWG website that publishes them. You can order the EWG Shopping Guide that contains them, or you can memorize the “Dirty Dozen” in order to buy them organically as much as possible. However you do it, the information is there to put into good use!