Chickenizing Farms and Foods is a book published by Johns Hopkins Press in September 2016. Written by Ellen K. Silbergeld, Professor of Environmental Health Sciences and Epidemiology at the Johns Hopkins Bloomberg School of Public Health, it is the result of 15 years of research into industrial meat production in the United States and around the world. The subtitle is: How Industrial Meat Production Endangers Workers, Animals and Consumers. 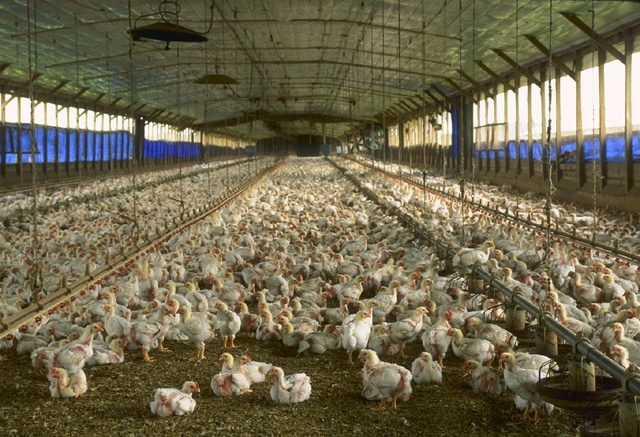 Confinement was the first step taken toward industrializing chicken production. Broilers were raised in buildings to improve efficiency and growth. Confinement separates animals from the environment and puts serious limits on their activity, allowing them to gain weight more quickly.

Concentration involves producing animals in high densities in confined spaces. It also refers to the concentration of such buildings within any given region. A single poultry house may have as many as 100,000 chickens and a swine house may have up to 8000 pigs. One county in Delaware, Maryland, or Virginia may produce 200 million chickens every year. The small village of Tar Heel, North Carolina grows and processes almost 35,000 pigs every day of the year.

Integration is the centralized management of the entire process. Arthur Perdue began this process in the poultry industry by acquiring hatcheries, feed mills, and slaughterhouses. That gave him complete control of production from the hatching of chicks to their slaughter for meat.

In the 1940s, two small studies suggested that adding antibiotics to animal feed helped promote more rapid growth. The FDA approved their use in animal feeds in 1951, and the practice quickly became standard.

Today, over 70 percent of all antibiotics produced in the United States are used for animals.

The development of antibiotic resistance in disease-causing bacteria has become a major problem. According to the CDC, there were over two million cases of human disease caused by drug-resistant bacteria in the United States, with 23,000 deaths. A powerful driver of this problem is the use of antibiotics in animal feed.

This growing epidemic is becoming a worldwide catastrophe as we run out of antibiotics that work in such infections. Dr. Margaret Chan, Director of the World Health Organization, warns that we are approaching the end of the antimicrobial era in medicine because of such flagrant misuse of antibiotics. The great irony is that there never was a good basis for approval of these additives to animal feed in the first place. According to Silbergeld, the only solid study of this practice showed little or no value in terms of increased productivity or improved disease prevention in the animals so fed. Yet, the industry keeps on using these additives.

The immense numbers of food animals in industrial livestock production generates an enormous volume of animal wastes. A single hog produces about a ton of waste in the course of reaching market weight of three hundreds pounds. Multiply this by thousands of swine and you have a horrendous waste problem that ends up in huge waste “lagoons” near the swine houses. Their offensive odor penetrates the atmosphere for miles around. Heavy rains cause spills and overflows that can cause massive fish kills.

Food safety is also a major issue. Aprons of workers in slaughterhouses and meat-processing plants are always splattered with blood and feces. Campylobacter is a common disease-causing bacteria found in chickens. The USDA claims that Campylobacter contamination is reduced to less than 30 percent of chicken carcasses after going through a decontamination bath. Yet up to 95 percent of poultry products purchased in stores test positive for Campylobacter. The FDA and USDA put the burden on consumers to protect themselves, advising them to practice good kitchen and food hygiene. Workers in the meat industry are nearly as vulnerable to injury and disease as they were over a century ago. 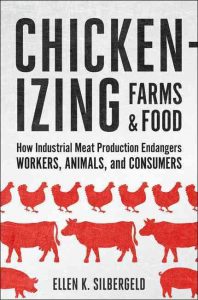 In her final chapter, Silbergeld explores the best way forward to ensure protection of human health, the food supply, animal welfare, and the environment. After her analysis, she is dismissive of all forms of alternative agriculture, saying none is up to the challenge of feeding the world while trying to meet these objectives. She concludes that despite all its problems, only industrial agriculture can accomplish these goals, and she calls for the creation of a “Bill of Rights and Obligations” to transform industrialized agriculture into a safe responsible industry.

Professor Silbergeld deserves great credit for thoroughly researching industrial agriculture and exposing the many problems in food animal production today. These problems have a huge negative impact on human, animal, and environmental health, calling for major corrective action. Part of that action could be strong regulatory reform along the lines she suggests, but it’s doubtful if the radical reform she calls for is ever likely to be implemented. Even if it could be, it’s not the best long-term solution so badly needed. Its simply not sustainable in the long run.

Silbergeld says that industrial agriculture is the only way we can feed the world if we “accept the ethical obligation to respect the aspirations and choices of others.” She comments with regard to diet: “No solution to a public health problem has ever been accomplished by requiring individuals or societies to make major changes in lifestyle or to limit personal choice.”

I agree that it’s important to respect the aspirations and choices of others. Yet when such choices result in poor outcomes, this should not be ignored. The unlimited intake of highly processed foods and meats carries major risks of developing deadly diseases such as stroke, heart attack, diabetes, and cancer. People have the right to make such choices, but encouraging high-risk choices is not wise. Industrial agriculture tilts the field in favor of food processors who promote unhealthy choices.

Fifty years ago, we faced a similar situation with regard to tobacco when we learned that smokers were at high risk for lung cancer and chronic lung disease. The right of people to smoke was not taken away, but a broad educational campaign over the last fifty years made it clear that smoking is not a wise choice. Today, far fewer people choose to smoke than was true fifty years ago. Encouraging people to smoke today is not considered ethical. Tobacco companies still try to do this in subtle ways, but nobody applauds them for doing so.

Today, we know that over-consumption of meat and highly processed foods are not healthy choices. They’re convenient, tasty, and cheap, but they’re high-risk for serious disabilities and the deadliest diseases of our era. Meat consumption has increased over the last hundred years with rising incomes. Can people reduce their intake of meat and highly processed foods now? The answer is “Yes” on an individual basis. I did this in the 1990s, and thousands of other people have done this as they learn about the serious health risks posed by these foods.

But can this be done on a population-wide basis? Again, the answer is “Yes!” The North Karelia Project demonstrated this very clearly. In 1970, North Karelians in Finland were suffering from sky-high heart attack rates and fatalities. They asked for help, and the North Karelia Project was born. Government, businesses, and community groups cooperated in launching an intensive multi-pronged educational campaign to cut down smoking, decrease high dairy-fat and traditional sausage consumption, and increase fruit and vegetable intake. Overall results were dramatic. Community-wide health practices changed over time, and by the early 2000s, mortality from coronary heart disease had dropped by 73 percent. Savings in health care costs alone were greater than the cost of the project.

The Food and Agriculture Organization (FAO) has researched this entire problem carefully around the globe. It reported to the United Nations General Assembly in 2014 that industrial agriculture is not sustainable over the long-term. Industrial livestock production alone takes up 70 percent of agricultural land today, including land devoted to growing feed for livestock. By 2050 this would approach 100 percent, which is clearly not tenable. Agro-ecology, working to reverse this trend, preserves the environment, maximizes efficient use of natural resources, and promotes healthy food choices. It’s the best solution for us and our descendants.

In the face of global chickenization of our farms and our food, can we successfully promote healthy living? The answer is “Yes!” The Blue Zones Project, working on community-wide changes in 23 American cities, is showing clear progress in its first five years. We can model benefits of a healthy lifestyle in our own lives. As time goes by, more and more people will join us in leading this trend to healthier ways of life. Fifty years from now, nobody will applaud industrial agriculture!