Home Reflections from My Twilight Years The Sprout Book

Sprouts are one of the most nutritious foods you can eat. They are easy to grow and harvest in your home, and when you grow your own sprouts, they are not expensive. The Sprout Book by Doug Evans makes it easy to get started. 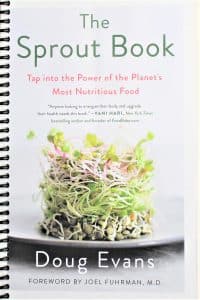 Evans, sometimes known as the Sprout Guru, began growing sprouts over 20 years ago. Before that, he says he was a “fast-food and meat-eater.” He said, “The less healthy the food, the more I was attracted to it.” He went to three different high schools, “sprayed graffiti on hundreds of subway trains,” and caused mayhem on the streets of New York.

Then he joined the 82nd Airborne Division of the U.S. Army and became a paratrooper. That was a turning point in his life. It taught him discipline and self-confidence. Yet, at age 29, he thought he was genetically doomed because his mother and father and several relatives died of cancer or heart disease in rapid succession, and his older brother had multiple life-threatening problems, including a stroke.

After meeting a dedicated vegan, he became an organic food enthusiast. His health improved dramatically. He began a successful organic raw-food and juice retail company in 2002 that he sold 10 years later. Then he developed a home juicing machine called Juicero that was also successful. Now he lives in the Mojave Desert with his organic sprouting business.

The great nutritional value of sprouts is well established. In 1997, researchers at Johns Hopkins University discovered that broccoli sprouts had amazing levels of cancer-preventing isothiocyanates, making them much more potent than mature broccoli. Since then, high levels of vitamins and other phytonutrients have been found in various kinds of sprouts.

Drs. Dean Ornish, Deepak Chopra, Joel Fuhrman, Joel Kahn, and many other nutritional experts are enthusiastic about sprouts and have endorsed The Sprout Book. I bought the book in April 2022. It was informative and it kindled my interest in growing sprouts. As a result, I’m now growing them as a hobby.

You can grow several kinds of sprouts at home. A 16-ounce packet of Salad Mix organic seeds proved ideal for me. It includes organic alfalfa, organic radish, organic broccoli, and organic clover seeds all mixed together in a sealed packet. Two tablespoons of seeds grow sprouts that can be harvested in five days. Organic sprouting seeds can be ordered from many sources.

Sprouts can be grown in various ways. I like growing them in 2-quart mason glass jars. Solid lids must be replaced with screen lids to allow easy rinsing. A two-jar rack lets jars tilt down at a 70-degree angle so residual rinse water can drain into a small ceramic drip tray. A Mason Jar Sprouting Kit that includes all these items is available on Amazon for less than $50. 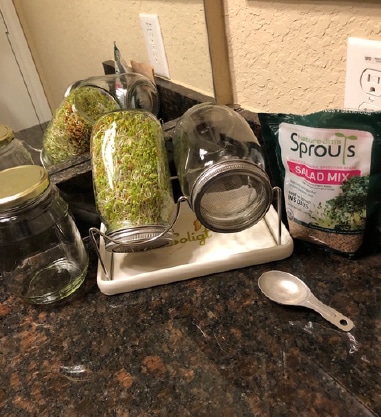 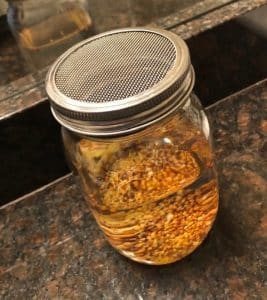 The picture above shows two mason jars on the rack. I put two tablespoons of seeds in an empty jar and fill it halfway with cool water (pictured at right). I slosh the seeds around a bit to wash them. Then I drain the water into the sink through the screen lid. After repeating these steps a couple of times, I let the jar stand on the counter half-full of water for eight hours to soak the seeds. Then I rinse and drain them and place the jar in the rack tilted down. I repeat this rinse and drain process four times daily for five days, and I watch the emerging sprouts begin to grow.

Mold can develop in growing sprouts if they are not washed and drained in a timely way. It should not be a problem if the clean, rinse, and drain process is done faithfully. It has not been a problem for me.

When a jar is full of 5-day-old sprouts, it is ready to be harvested. I let the sprouts dry in the tilted position overnight and then transfer them to a clean empty jar with a fork. (This jar does not have to be a mason jar.) Capping it with a solid lid, I put the jar in the refrigerator, where the sprouts will be good for up to a week. I enjoy their fresh taste in the salad with our dinner every evening!

This entire process is easy once you’ve done it a couple of times. It only takes one or two minutes to rinse the sprouts, so it’s no problem to do this a few times daily. Sprouting is not for everyone, but for those who take it up, the payoff in taste and nutritional value is great! For those who like to experiment with more variety, The Sprout Book has 60 pages of sprout-based recipes. Enjoy!