My parents had missionary training to go to Africa in 1936. I was ten months old when we arrived. Everyone had to take quinine to fight malaria. I was given a crushed pill in applesauce, but that didn’t disguise its bitterness. I fought it vigorously, making quinine time a daily battle.

A few months later, a missionary woman coming through London bought a bottle of pills advertised as a chewable form of quinine. (The label on the bottle was in Latin.) My parents gave it to me, and I chewed it up without any fuss. Relieved, my parents gave it to me every day for about three months.

The end result was nearly catastrophic. I had been an active toddler, but at the end of the three months, I was crib-fast and had to be carried like a baby. 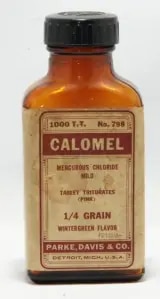 My parents called in a Portuguese doctor. He examined me and studied the label on my pill bottle. After chewing one of the pills, he shouted, “This is not quinine; it is calomel. Never give him another pill.” He gave me quinine injections before starting me on real quinine pills.

Calomel was widely taken for over two hundred years as a panacea for many illnesses. Yet it had many lethal side effects and was finally taken off the market as a medication in the mid-1900s.

Within six months after stopping it, I recovered from my acute symptoms and was running around like any other 2-year-old. The calomel caused my developing permanent teeth to be mottled. I thought that was its only long-term impact on me – until recently.

After I was diagnosed with Parkinson’s disease, we learned that exposure to mercury can be a causative factor. As we researched this, it dawned on me that my early calomel poisoning could be the cause of my Parkinson’s disease. Why? Calomel is half mercury. I nearly died from mercury poisoning as a child!