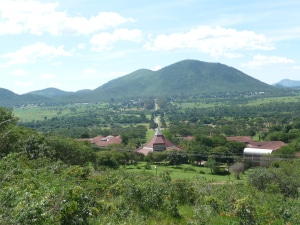 May 1st is a national holiday in Zimbabwe, so we had no classes or final exams today. Larry Kies asked me a couple days ago if I’d be interested in early morning tennis today, so we were on the tennis court at 7 a.m., not too long after sunrise. As I mentioned in an entry last year, this is a crazy, makeshift tennis court. It isn’t getting any better with age.

A crumbling concrete surface with numerous shallow potholes makes for some crazy bounces of the ball, but reacting to the erratic ball is not the only challenge. The court surface is lined for volleyball and basketball as well as singles and doubles tennis. Making out which fading lines on the crumbling concrete are the right ones is tricky. Then there’s the matter of the net. Not having a tennis net, we stretch the volleyball net across the court at about the right height for tennis. Since a tennis ball can go right through the larger holes of a volleyball net, deciding if a stroke is good or bad can be dicey.

At least we had a new can of Penn balls. After playing a few games, we began to adjust to the crazy bounces a bit better. It also helped when the ball hit the few patches of smooth concrete on the court, and we actually enjoyed a few extended rallies. In the end, Larry beat me. Despite being, or maybe because we are crazy older players willing to play on a crazy court, we had a good time