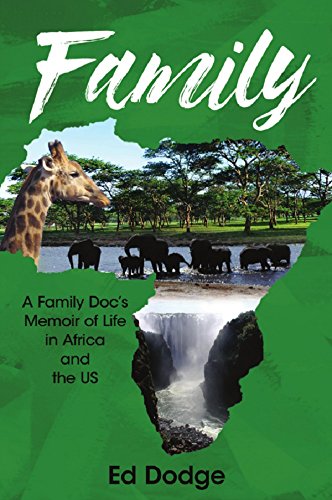 Family: A Family Doc’s Memoir of Life in Africa and the US —

When Ed Dodge was born in Salamanca, New York, nobody could have guessed the twists and turns his life would take. He spent much of his childhood in Angola, where his parents were missionaries. He suffered culture shock when he returned to America as a teenager, but went on to become a physician who worked in the United States and Africa at various stages of his career. Along the way he was a prison doctor, an emergency room physician, a public health director, a family doctor, a volunteer with Volunteer-in-Mission teams in Africa, and an adjunct professor of health.

A few things remained constant: a love of family that took high priority during every stage of his career; a passion to work for people’s well-being; and his search for spiritual meaning. In the process, he rediscovered the ancient spiritual truth that all of us have innate, God-given healing power if we don’t sabotage it with negative thinking and unhealthy habits. Synthesizing all of this, he and a colleague recently cofounded the Family Wellness Institute to inspire and support healthy families.

Ed’s adventurous journey has spanned eight decades and counting. His story will inspire you to think about what you value most in your own life and pursue it for all it’s worth.