Home Diet FOOD: What the Heck Should I Eat?

FOOD: What the Heck Should I Eat? 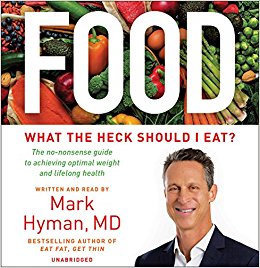 He characterizes the multitude of alterations and additives in them as anti-nutrients, and goes on to say: “Today’s industrial food-like substances have hijacked our taste buds and brain chemistry. Food giants have taste institutes where they hire ‘cravings experts’ to identify ‘bliss points’ of foods to create ‘heavy users.’ (These are terms companies use internally to describe what they do.”

The result is that: “Our industrial food system, sponsored and supported by our government policies, has taken over our bodies, minds, and souls. It’s like the invasion of the body-snatchers. Most of us have no clue. And worse, most of us blame ourselves for our bad habits, cravings, and weight gain.”

Hyman goes on to say that if we all tapped into our common sense, we would agree that we should be eating real whole food. His book “gets into the nitty-gritty of what it really means to eat this way.” He offers us “The Pegan Diet” as his solution. Pegan is a term that he created to merge the ideals of the ‘paleo’ and ‘vegan’ diets.

Basically, his thesis is that real, pasture-raised meat (as opposed to industrially produced meat,) has unique nutritional value. He goes into why this is true in his chapter on meat. He advises us to eat small servings of pasture-raised animal food daily. His other take-away from the paleo diet is its prohibition of grains such as wheat, rice, and oatmeal. Otherwise, he loves whole, plant-based food, stating that when applied correctly, food is the most powerful healing “drug” we have.

This is an important book. I give it 4 stars on a 5-star rating system. His clear discussion of the values of pasture-raised meat and wholesome veggies, and his combining them in a practical nutritional plan, is helpful.

I didn’t give it 5 stars for two reasons. First, his condemnation of grains is not based on strong science. There are some people who shouldn’t eat grains, but most of us can benefit from eating wholesome grains in moderation. The problem is that the industrial food system co-opted most grains in large amounts, modifying or adulterating them in the process. These processed grains should be avoided. But beyond that, Hyman seems to have a bias against whole grain oatmeal and many other whole grains. He does allow a few exotic grains like quinoa and amaranth.

The other reason for giving his book 4 stars instead of 5 is that he includes too much meat in his eating plan, even though it is pasture-raised meat and serving size is limited. We still have much to learn about the ideal amount of protein for humans. In the meantime, much good research suggests that eating too much animal-based protein has an adverse impact on long-term health. Two videos worth watching are at NutritionFacts.org: Which Type of Protein is Better for Our Kidneys? and The Great Protein Fiasco.

Strength in Stillness: The Power of Transcendental Meditation is a new book by Bob Roth, published last month by Simon and Schuster. Roth is the CEO of the David Lynch Foundation and directs the Center for Leadership Performance. He has taught Transcendental Meditation to thousands of people over the past 45 years. Once a skeptic, Roth trained under Maharishi Mahesh Yogi, a leading scientist of consciousness and meditation, and is one of the most sought after meditation teachers in the world today. 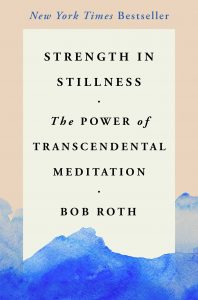 Roth says that we’re living in an era of unprecedented stress. We are slammed with it 24/7 by a “plugged-in world that never, ever stops.” Living in this atmosphere of stress causes significant health problems, mentally, emotionally, and physically. Immune systems are affected, blood pressure goes up along with the risk of cardiovascular disease, and lives are impaired with a wide range of disorders. Toxic stress is killing us.

There is no magic bullet to resolve this epidemic. There are drugs to combat it, but not one truly prevents or cures stress. More and more people are turning to meditation for help. A multitude of scientific studies validate the benefits of meditation. We know today beyond the shadow of a doubt that meditation brings about changes in the brain that are truly beneficial.

Roth defines three basic kinds of meditation. He’s found value in all of them, but has found Transcendental Meditation to be the most beneficial. TM opens the door to an unbounded field of “restful alertness” that transcends all thoughts and feelings. It is here that you find rest and peace with your deep inner self. It is always there, potentially available to you, but too often lost or obscured by the constant noise and distractions of the day.

Roth’s book explains the TM technique and what you can expect as you learn to practice it. He shares stories of people from all walks of life who have seen TM change their lives for the better, and he shares the story of his own journey in TM. His stories illustrate the benefits of meditation for a wide range of people. There is strength in stillness.

My medical school class had its 55th class reunion last May. It was the first class reunion I’ve been able to attend, and I saw classmates that I hadn’t seen since our graduation. It was great to get re-acquainted with them.

Much to my surprise, the Office of Alumni Relations contacted me a few months after our class reunion. The Director wanted to schedule an interview with me. The end result is a nice story that’s in the alumni newsletter this month.

The end of that article mentions my new book and shows a picture of the book cover. Here’s the story of my book.

Just published by WheatMark in late February 2018, the title is Family: A Family Doc’s Memoir of Life in Africa and the US. This book is not one of my usual books on health, but it provides an informative framework and setting for my life’s work in health. For anyone interested, it’s available as a paperback and an ebook on Amazon and other book outlets. 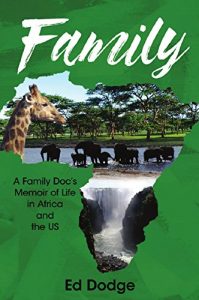 Summarizing briefly, it paints a word picture of my early life in Africa, and then reveals my struggles in adjusting to life as a teenager in the United States. Later, I returned to Africa as a public health physician with my own young family. I intended to devote my life’s work to Africa, but Nancy’s culture shock was so severe that a career in Africa became untenable.

Returning to the US, I worked with the Frontier Nursing Service in the mountains of Eastern Kentucky. Eventually we settled as a family in Florida, and I became a family physician for a little over two decades. Then Nancy suffered a crisis in her health, and we went through the rugged experience of coping with her terminal cancer. Nancy taught me lessons of eternal value in the process of eventually coming to peace with her illness.

After Nancy passed away, I went through a time of professional limbo. My personal life was re-kindled when I met and married a wonderful lady from San Antonio, Texas, where we eventually moved. A series of improbable events led me back to Africa to close my professional career by teaching public health at Africa University in Zimbabwe. This proved to be most rewarding for me – a capstone to my career in many ways.

The 75-plus years between my early life in Angola and my later work in Zimbabwe was a time of profound change in Africa. Diseases such as malaria and other dominant communicable diseases of the 1900s were under better control by 2015. In the meantime, a growing tidal wave of heart disease, high blood pressure, stroke, diabetes, and other Western diseases began sweeping across Africa with deadly consequences. Rare in Africa before 1960, they became epidemic diseases there in the 21st century.

Ironically, my years of striving to treat these diseases effectively in the US prepared me for dealing with them in Africa. Prevention by means of a healthy lifestyle is clearly better than treating these diseases after they become entrenched. The United States is moving toward this goal at a glacier pace. Interestingly, Africa could lead the way back to healthy lifestyles in the future. I’ll give some talks about this in the San Antonio area this spring. If anyone else is interested in a talk about my book, please contact me.

Order Family: A Family Doc’s Memoir of Life in Africa and the US.