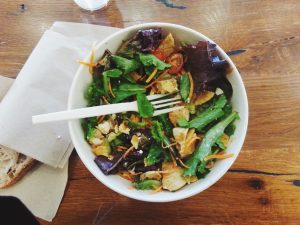 I’ve discussed the value of fiber in the last few blogs, but there are more amazing plant-based values to write about. Plants are much richer in antioxidants than any other food source. According to Dr. Michael Greger in his book, How Not to Die, plant foods on average have 64 times more antioxidants than animal foods. A serving of fresh salmon has only 3 units of antioxidant power, and a hard-boiled egg has 4 units. Many plant-based foods have dozens or hundreds of antioxidant units, and some kinds of berries have over a thousand units per serving.

Most people have heard that antioxidants are good for us, but why are they good for us? The basic problem is that oxygen molecules become dangerous when they latch onto loose electrons. They turn into superoxide, a type of free radical that is very reactive and damaging to cellular structures, including our DNA. Antioxidants neutralize this oxidative stress, saving internal cells and tissues from serious damage. Plant-based foods gives us this protection much better than any other kind of food.

A different type of damage is caused by toxins called “gerontotoxins,” meaning aging toxins. Advanced Glycation End-products (AGEs) are a common kind of gerontotoxin. Evidence tells us that AGEs are a factor in premature aging, and much research shows that AGEs in the brain may contribute to causing Alzheimer’s Disease. In glycation, sugars and proteins become cross-linked to deform the proteins involved, damaging their normal function. For  example when collagen is involved, it loses much of its elasticity. Since collagen is the main protein that gives our muscles, arteries, guts, and skin their flexibility, loss of flexibility in these tissues and organs is a serious problem. Deformed protein tangles in the brain are even more serious. 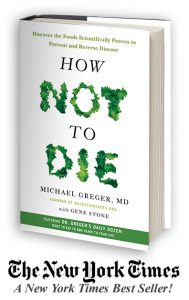 Some AGEs are produced through natural metabolic processes in the body, but many are introduced into the body by the foods we eat and the way they are prepared. In his book, How Not to Die, Dr. Greger says that over 500 foods have been tested for their AGE content. Meat, cheese, and highly processed foods had the highest AGE content, while grains, beans, veggies and fruits had the lowest. Meat averages about 150 times more than fresh fruits and vegetables. Researchers concluded that “even a modest reduction in meat intake could realistically cut daily AGE intake in half.”

Vital Insight: Since veggies and fruit are high in protective antioxidants and low in hazardous AGEs, it makes a lot of sense to eat plenty of them every day!