A Day at Project Mercy

Most of our group was up at 6 AM for a three-mile hike to the foothills of the Guråge mountains, a large chain of mountains just west of Yetebon and the Project Mercy compound. As we hiked, Randall filled us in on the early history of Project Mercy. Founded as a refugee relief organization, its mission changed when the communist government was overthrown in the early 1990s and thousands of Ethiopian refugees were able to return to their homeland. When Marta and Déme went to Marta’s home area in Yetebon, they were begged by elders of the community to establish a school and a clinic there. It was such a remote poverty-stricken area that almost no governmental services had ever been established there. Marta and Déme transformed Project Mercy to a community development NGO (Non-Governmental Organization) to meet this need.

After a good breakfast in Project Mercy’s dining hall, Katie, our hospitality hostess, led us on a tour of the large 15-acre compound. Extensive gardens and orchards grow most of the veggies and fruit needed to provide breakfast and lunch for hundreds of students and staff at Project Mercy. They also serve as demonstration gardens for the community. Thousands of families in this region eat more healthfully today because of this. Water for the gardens and the community is piped in from a pristine mountain stream and reservoir developed by Project Mercy.

We took a short walk from the gardens to a skills training center established by Project Mercy to teach villagers marketable skills. About 50 village women were weaving baskets of various sizes and shapes in the large basket-weaving building. It has become a thriving industry in the area since being introduced by Project Mercy. The bead-making center was closed today, but it produces thousands of beautiful bracelets and jewelry pieces. This center is a fund-raising center for Project Mercy in addition to teaching bead-making skills to selected residents. The carpentry and welding centers were closed today, but they have produced many skilled workers for the region.

A quick stop at the Children’s Home revealed a two-story building with a capacity for housing about 30 homeless children. The upper level has become a dormitory for nursing students attending the Project Mercy School of Nursing that we visited later. Through the years, hundreds of homeless children have been given a good boost in life at Project Mercy.

The Primary School is in the Project Mercy compound, but students were on vacation. The high school used to be here also, but Project Mercy’s modern high school building was completed a mile or two away from the main compound three or four years ago. Students from grades 9 through 12 now go there. This building also houses Project Mercy’s College of Nursing established recently to meet a need for nurses and skilled midwives. Thousands of students have attended Project Mercy schools through the years, and hundreds of graduates have gone on to graduate schools in Ethiopia and elsewhere. They are a testimony to the powerful impact Project Mercy has had on this previously illiterate area.

The final stop for the morning was at Project Mercy’s hospital, established over ten years ago to meet medical care needs in the community. Staffed by three doctors, and supplemented by visits from many specialists from abroad, the hospital has provided valuable services to the community over the years. Project Mercy has been a major factor in developing needed infrastructure for this area In order to provide all these community services. Roads, bridges, electric power, and potable water supplies have brought Yetebon into the modern world. Project Mercy deserves major credit for most of this.

After lunch we hopped into the Project Mercy bus to visit nearby Rift Valley landmarks. The Guråge mountains, 9000 feet or more high, form the western boundary of the extensive Rift Valley in southern Ethiopia. The valley is a major geographical feature of east Africa, going from the horn of Africa down to southern Mozambique.

Our first stop was at a new fissure that has developed in the valley, about 20 miles east of Yetebon. A new crack in the floor of the valley opened after a small localized earthquake within the past few weeks. Ten to 15-feet wide and over 20-feet deep, this fissure is visible for a length of hundreds of feet. It swallowed up at least one new home that was being built and created great gaps in the yards of many more. One family told us they felt the tremor at around 3:30 AM and were stunned to find this huge gap in their front yard when they woke up again in the morning. 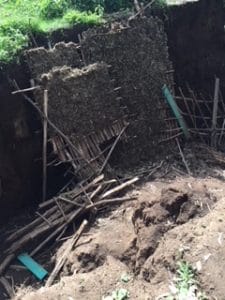 A few miles further on, we stopped at Crater Lake, a deep perfectly round lake at the summit of a small mountain in the miles-wide floor of the Rift Valley. We walked about two miles following a path around the top of this crater, followed by about a dozen local boys who came up from small farms on the surrounding slopes. The plowed soil looked rich.

Our last stop was at the home of Bedru’s parents and siblings in the roadside town of Buta Jira. Bedru was the first Project Mercy student to win a scholarship to Taylor University in Indiana. He was one of the first students from the Yetebon area (where his family lived before moving to Buta Jira,) to graduate from Project Mercy and do so with top-notch grades. When he went to Indiana he was informally absorbed into the Randall Dodge family, rooming with Randall’s son Reid at Taylor.

Bedru had married an American girl who was a Taylor classmate and who had been to Project Mercy. He had become a U.S. citizen, and he and Mandy both worked in Indianapolis. They had a baby girl last year, their first child. Bedru hadn’t been back to see his family in Ethiopia for 8 years, but he and Mandy were able to get enough time for a visit to Ethiopia this year, just a couple weeks before our family trip. It was the first time for his Ethiopian family to meet Mandy and Keria.

They invited all of us to visit them while we were at Project Mercy, so this was the perfect time to do so. They served us tea and a tea-roll with honey as we sat on cushions on the floor, Ethiopian style, in their living-room. Bedru interpreted for all of us as we exchanged greetings. Later, we took a variety of family pictures before climbing back on the bus. It was a nice way to conclude our day at Project Mercy.