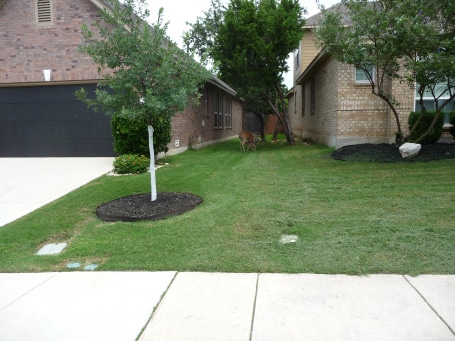 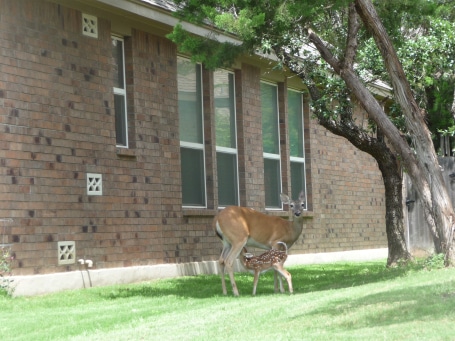 My neighbor was puttering around his front yard when I went out to do some yard work this morning. He motioned toward the front of his house. When I looked more closely, I could see a newborn baby deer lying behind a rock in his landscaped area. He said it had been lying there a few hours. Mama deer was nowhere to be seen. We agreed the best thing to do was leave it alone and wait for Mama to return. As I trimmed bushes in my yard for the next couple hours, I noticed that Bambi moved around a bit, wobbling behind nearby bushes for a few minutes, and then lying back down near the rock.

I went into the house to have some lunch. When I came out, Bambi was still lying down, but a little later it went back into the shadows between our houses. About 3 pm I walked down the block to get our mail when I noticed a young doe walking slowly up the street, stopping to glance around and occasionally nibble a bit of grass in someone’s yard. On a hunch, I turned around and followed her, staying back a little. She’s a doe I often see on my daily walks. She’s familiar enough with me that I can walk close to her when she’s grazing near the sidewalk. She’ll look at me as I walk by, but doesn’t bolt.

Today, she sauntered on up the street, her pace picking up a bit as she got close to our house. Then she disappeared into the side yard between our house and the neighbor’s. The next few pictures tell the story of what I saw when I got there.

Once the baby deer was satisfied, Mama led it to the sidewalk, and then toward our little neighborhood park with a quicker pace. Freshly re-energized, Bambi scampered along behind her. Then they disappeared into a wooded area behind the park, leaving me with memories of a remarkable day! 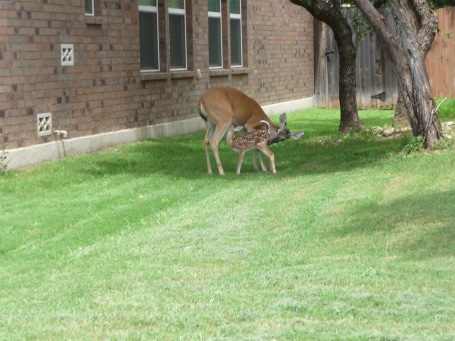