We went to the village of Nkhafi, 50 miles north of Lilongwe this morning to visit Wandikweza’s program to improve community health by empowering women. We stopped at Senga Primary School on the way to visit the Wandikweza Girl Child Empowerment Program there.

Malawi has significant problems with girls being early dropouts from schools and being forced into marriage in their early teens. Wandikweza uses the slogan, “Don’t marry me, educate me” to help stop unhealthy early marriages. Senga Primary School has over 2800 students. A number of these students fall into the category of “Orphans and Vulnerable Children.”

Wandikweza started a Girl’s Club for 32 girls from this group of vulnerable children to give them supplemental health education and skills training to help break the dropout, early marriage cycle that so many are subjected to. One of the top teachers in the school volunteers to meet with them for an hour after school twice a week to help accomplish this. We met her and had a quick meeting with the girls during their morning break. They were quite shy, but they sang for us, and then several recited brief stories or poems about their situation. When we asked what their future goals were, one girl wants to become a teacher and another wants to become a doctor. The support system offered through the club is helping them! 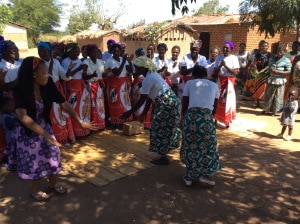 Women of Nkhafi, singing and dancing

We then drove on to our second destination. When we got there, a group of about 30 animated women were waiting for us, and they broke into a welcoming song and dance for us as we entered the village. After we got out of the car they continued to sing as they led us to the community meeting place in the shade of a large tree. We were met by three local chiefs who welcomed us warmly, and ushered us into seats of honor with them under the tree. The women continued their welcoming singing and dancing for another 15 minutes or so, and then sat down on clean reed mats in front of us, also under the shade of the tree. Then each of the chiefs gave us a welcoming speech, saying how much Wandikweza had helped their village by teaching their women new skills and confidence. One of the women who was clearly a leader in the group also gave us a welcoming speech in which she gave Wandikweza credit for greatly improving their lives. Mercy translated quietly for me as they were talking. It was obvious that all the women and the chiefs think very highly of her. 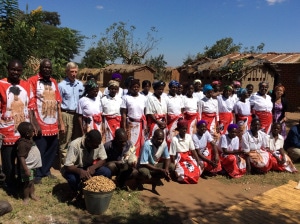 Women of Nkhafi with Mercy at one end of line and Ed with two chiefs at the other end.

After the speeches were concluded, the women got up and led us about half a mile to one of their fields of hybrid corn, singing and dancing all the way. Then they led us down another long path to their sweet potato fields, where they sang and did a work dance, swinging imaginary hoes at the plants. Finally we all trooped back to the great community tree as the women continued to sing.

Once we were all back in our respective chairs or places on the mats, the women dramatized a team meeting in which they contributed money to their own small credit fund. Most of the women were illiterate when the program started, but one of the things they wanted to do was learn to read, so they formed an adult literacy class, and many have learned to read. They have a treasurer and secretary for the group, and keep careful records. All transactions are transparent with total accountability. Mercy said that as individuals and as a group, their confidence had grown by leaps and bounds since the group was first formed. The chiefs also said how much this program of empowering the women had strengthened their villages. The chiefs accompanied us in all the morning activities and were clearly very proud of this group of women.

At the conclusion of the program, gifts representing the fruits of their work were presented to me as the guest of honor. So it was that I received a large basket of groundnuts, a large bag of sweet potatoes, and a live chicken. I gave a short speech of appreciation for all the morning’s activities, and complimented them for all their achievements. I also said it was clear to me that Mercy deserved great credit for all she has done with them, and that got more cheers than anything else I said. It was a fitting conclusion for the day, and we were sent on our way with more singing and dancing!