Mercy, Victor and I were on the road at 7:30 a.m., heading for a small rural village about 50 miles north of Lilongwe. We arrived shortly after 9 a.m. and Mercy introduced me to Alli, the Health Surveillance Agent (HSA) for the Ministry of Health for that area. He’s a personable man who is responsible for helping a little over 2,000 people in a catchment area of 22 small villages scattered over an area of several kilometers. Alli had a big smile and was happy to tell me about the challenges and achievements he found in his work. He received his training in 2006 (an intensive 10-week course provided by the Ministry of Health.) He was then assigned to coordinate health care in this village area. He meets with the local tribal chief and other community leaders every three months. Together they decide on how to address the most urgent health priorities and select community health volunteers to work with him. He runs several kinds of clinics and does home visits to give basic health education and encourage pregnant women to attend Antenatal Clinics at the government Health Center about five miles away. 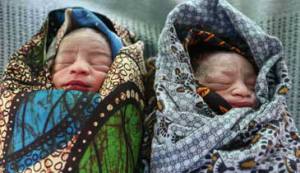 By the time Alli had finished orienting me to the area and the services he provides, it was time to start the Under-Five Clinic scheduled that day. This used to be held under a large tree by the roadside, but the community pulled together to build a basic brick shelter for this purpose two years ago. The unfinished brick walls and tin roof enclose a large room with a dirt floor and openings for a door and four windows to provide access and light.

About fifty young women with babies in their laps or strapped on their backs sat on the dirt floor and sang their greetings to us when we entered. Alli spoke to them at first, and then asked Mercy to say something to the group. She did so in an animated way, and then the whole group broke into song again with big flashing smiles. Some even got up and danced a bit in time with the singing. After 15 or 20 minutes of this preliminary teaching and singing, it was time to start the clinic operations.

Babies and small children were weighed by one volunteer, while a second volunteer wrote the weight down in the health record each mother carried for her child. After this basic growth monitoring, mothers lined up with their babies to receive whatever basic vaccine was due. These included polio, tetanus, measles and TB vaccines, and they were administered by Alli and two other health agents (HSAs) who came over from neighboring areas to help out on this day. Their technique was quite good, considering the handicaps they worked under and how basic their training had been. There is no doubt that such health services have been very effective in markedly reducing maternal and infant mortality over the past fifteen years.

At some point during the morning, Alli told me about the handicaps he works under. He needs a bicycle to serve his 22 villages better, and he said a bicycle-ambulance would be a big help in carrying sick patients to the Health Center five miles away. He also said that a cell phone would help improve his ability to communicate with other workers and with the District Health Officer. Finally, he said that a raincoat, rain boots, and an umbrella would be a huge help during the rainy season. Despite the handicaps he works under, he said that he enjoys his work and finds it very rewarding. He is happy he decided to get the training to become a Health Surveillance Agent. His big flashing smile confirmed his words.

The Community Health Volunteers in this village area have not been given the intensive one-week training that Mercy was able to give the 15 volunteers we saw at work Friday, but she hopes to provide such training in the future. When that happens, it’s clear that her Wandikweza program will enhance the work of the Health Surveillance Agents in this area.