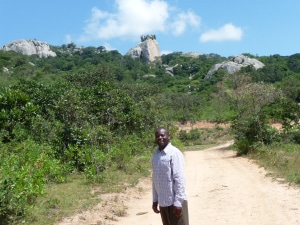 Chris with Rock Mountain in background

I took a back-country hike to Tsvingwe after breakfast this morning, where I met Chris Matinha, my stone-carving friend who lives there. Then we hiked another three miles to a striking Rock Mountain that is home to a few of the Bushmen Rock Paintings of Southern Africa.

These paintings are thousands of years old. Many have faded quite a bit over those thousands of years, but some still show amazing detail. The picture shows Chris in the foreground with the Rock Mountain in the background. We still had some rugged climbing to simply get to the base of that mountain.

Getting to the cave site inside the mountain was not easy. It involved careful climbing over awkward rock formations and sliding through narrow horizontal crevices on our stomachs, but it was worth the effort. The rock painting are not inside the cave, but are located on the surface of giant slabs of rock that slant out and upward to form a cathedral peak high above. We first visited this site one year ago, but I was even more impressed with the paintings on this second visit. 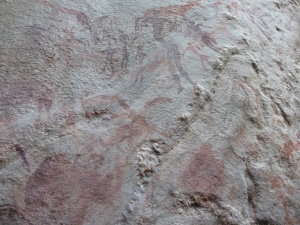 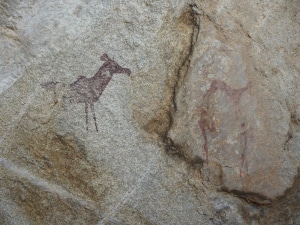 Careful inspection shows remarkably detailed animal and human anatomy, even though many of the paintings have faded a lot through the millennia. Unfortunately, overnight campers have had campfires in the cave and the cave walls are all blackened because of this. The rock paintings are located just outside the opening to the cave, and some of the smoke has clearly drifted by them. It’s a shame because the paintings are an irreplaceable national treasure that should be carefully protected. Fortunately there are many more similar rock paintings in Southwestern Zimbabwe that are in a protected national park area.

After spending most of an hour viewing the paintings at the cave area, we clambered down into a charming glade at the base of the mountain and enjoyed a picnic lunch of roasted ears of corn, freshly picked avocado (from Chris’s avocado tree) and bananas. It was an idyllic setting for such a lunch. Then we packed up and hiked back home. It had been a grand day!